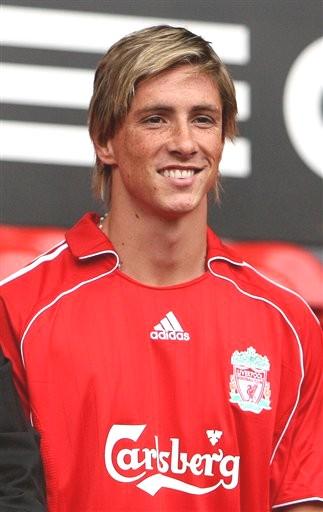 In his first interview in English football, Fernando Torres talks to Liverpoolfc.tv about signing for the Reds, goals targets and his famous You'll Never Walk Alone captain's armband.

You've just put pen to paper Fernando, how does it feel?

I am very, very happy. This was the biggest decision of my footballing life but I've come to a winning club. This is a club of champions - one of the biggest there is. I now want to play my part in that and be a champion too and help the club progress.

How much do you know about Liverpool Football Club?

Obviously growing up in Spain you are aware of all the big clubs there, but you also keep an eye on Europe, and Liverpool always catches the eye. It always did for me. I had older brothers who'd tell me about the likes of Keegan and Rush, but the first players I remember seeing as a fan are players like Robbie Fowler. My main memory is seeing Liverpool's incredible record in Europe, and I certainly followed that closely.

When did you first hear of Liverpool's interest in you?

It was just a couple of weeks ago, it's all happened very quickly. I was aware of offers from other clubs but as soon as I knew Liverpool were interested I said to Atletico: "Look, please listen to this offer." There were many clubs being banded around. Offers go directly to Atletico, so I wouldn't necessarily know about them, but as soon as I heard about Liverpool, I told them that Anfield was the only place I was interested in.

Why did Liverpool stand out for you?

I'm aware of the history and how special this club is. The tragedies that have happened have made the bond between the fans and the club so strong. Liverpool just ticks all the boxes for me. There's team spirit and a desire to win instilled by Rafa, and then there's my new teammates like Pepe and Xabi. They, as well as Luis, have always spoken very positively about life here in Liverpool. I didn't speak to them directly before signing because it all happened so quickly. I've been getting planes here, there and everywhere. My other half has spoken to Pepe's other half though. She said: "We're here for you. Let us know if there is anything you need."

Tell me about the captain's armband you displayed during a game against Real Sociedad last season, with You'll Never Walk Alone written on the inside?

There is a group of my mates, about five or six of us, and we've all grown up supporting Liverpool. Because they are all so committed to Liverpool, they've had We'll Never Walk Alone tattooed on their arms. It's changed slightly because it's a symbol of our friendship as well as our support for the club. Obviously I couldn't have that tattooed on my arm playing for Atletico, but they gave me this armband as a present for my last birthday.

Why have you decided to leave Atletico now?

The time is right because Liverpool have come in for me.

Was it a difficult decision to make?

You have certain chances in life. You can't afford to miss them because they only come around once. I've been with Atletico since I was 10, I've grown up as a person and a player there. But we haven't been getting the opportunities to play in Europe and I think I now need to take that step up.

How big a factor was Rafa Benitez in your decision to come to Merseyside?

The first time I spoke to him, I was convinced. Just to know Rafa has confidence in me and trusts me is massive. I feel honoured because Liverpool are such a big club, they could have signed anyone. I am very pleased they have chosen me!

What do you know about the fans here in Liverpool, and how much are you looking forward to playing in front of the Kop?

I've spoken to many people about it and watched many DVDs, but you can't possibly know what it feels like to play at Anfield until you have experienced it. I am dying to play in front of the Kop.

Have you set yourself a goals target for your first season?

Not really, but I suppose the first target is to beat what I got in Spain. My average there was 15.

Finally, what message would you like to send to Liverpool fans?