This is Anfield... so what?

IF Real Madrid didn’t know it before, they are now all too painfully aware of what a European night at Anfield is all about. 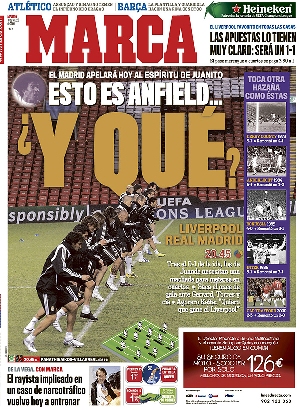 “This is Anfield – so what?” was the clarion call of Spanish newspaper and unofficial Real mouthpiece Marca on the morning of yesterday’s game.

Four unanswered goals in a red tidal wave of a performance that washed Europe’s most decorated club aside has surely ensured that such sneering questions will never be posed again.
Real were not just beaten, they were pummelled into submission by a Liverpool side which grabbed their illustrious opponents by the scruff of the neck and never let go until all signs of life had been squeezed out of them.

Rafa Benitez may justifiably feel that his team’s exploits in Europe are never given the credit they so richly deserve, but who needs the respect of critics when you can have results like this?
This might not have been the Madrid of Puskas and di Stefano and Juande Ramos’ team may well have been a pale shadow of the famous Galacticos who played football from an another planet earlier this decade, but as their recent league form underlines, they are no mugs either.

The fact that they were made to look like they were says everything about a Liverpool performance which will live long in the memory of all who were fortunate enough to witness it. From the very first blast of Frank de Bleeckere’s whistle to the very last, every man jack in a red shirt played as if possessed by a burning desire to be on the winning side in this battle of two of Europe’s real giants.

Fernando Torres set the tone as he set about familiar foes with all the relish and desire one would expect of someone who made his name with Real’s city rivals. It was as if the white shirts of Real served as a red rag to this Spanish bull and in the first half hour in particular Torres was simply unplayable as he tore Fabio Cannavaro and Pepe apart with a combination of a prodigious workrate and flashes of phenomenal skill.

At the end of this breathtaking spell, Liverpool were two goals to the good as Torres took advantage of his own pulverising of the Real backline before Steven Gerrard added a second from the penalty spot after Gabriel Heinze was harshly adjudged to have handled.
Real felt hard done by over that decision, they could have no complaints about the scoreline as had it not been for a string of superlative interventions by Iker Casillas they would have been even further behind.

It is at such desperate moments that Real traditionally hope for the intervention of Juanito, their very own patron saint of lost causes, but there was nothing he nor anyone else could do to rescue them this time as the ferocious tempo Liverpool were setting made it impossible for Juande Ramos’ side to even get a foothold in the game - never mind turn it around.

The former Spurs boss must have winced as the action unfolded in front of him. Having insisted that he had not been out thought by Rafa Benitez in the first leg he will have been well aware that no such arguments could be proffered after the second.

This was not the tactical battle so many had expected, it was a tactical mis-match with Benitez outmanoeuvering his opposite number with contemptuous ease.

If the battle plan was down to the Reds boss, it was executed with ruthless efficiency by his players who did not rest on their laurels even when a three goal aggregate lead had been established.

Any ideas that Liverpool would sit back on their half-time advantage were immediately dismissed shortly after the re-start when Gerrard marked his 100th European appearance with a goal to fit such a landmark occasion. 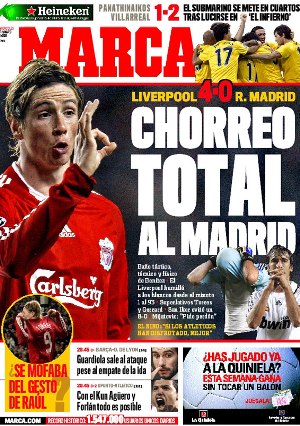 Arriving in the box with typically perfect timing, the Reds skipper made the most of Ryan Babel’s perfect delivery by dispatching a sumptuous half volley past the powerless Casillas. That techically perfect strike brought the world’s richest club to its knees and the vociferously passionate Anfield crowd to its feet, a wonderfully iconic moment on a wonderful night.

Imperiously brushing footballing royalty aside was not enough for Liverpool though and the hunger which had put them in such a commanding position did not diminish even with the game and the tie well and truly in the bag.

Part of the reason for their insatiable appetite was the introduction of a trio of substitutes who all had something to prove for one reason or another. Andrea Dossena, Lucas and in particular Jay Spearing all entered the fray and brought something to a party which showed no sign of letting up. Dossena’s night was made memorable by his first goal in a red shirt as the Italian made the most of Javier Mascherano’s unstinting perseverance to score Liverpool’s fourth.

But it was local lad Spearing who had the home fans chanting his name as he showed no fear of reputations to produce a memorable cameo which will give him the belief that he can make an impression on the first team after being a stalwart at reserve level for so long.

Like the rest of the team mates, the diminutive midfielder can now look forward to next week’s draw for the quarter finals of the Champions League in the knowledge that Liverpool will again be one of the teams that most others will be desperate to avoid. They are not just surviving in the European elite under Benitez, they are positively flourishing in it and it is high time that their prowess in continental combat was lauded in the way it should be.

Far too often Liverpool are begrudgingly described as a good European outfit, as if the Champions League is some sort of consolation prize for those who cannot hack it in the cut and thrust of domestic action.

Admittedly, the Reds’ failure to perform as well in the Premier League as they do in the Champions League is a disappointment. But when clubs of the calibre of Real Madrid, Barcelona, Chelsea, Inter Milan, AC Milan and Juventus are so regularly overcome, their European exploits could hardly be a cause for complaint.

There is something very special about Liverpool in Europe and in the not too distant future supporters will look back on nights like last night as among the most glorious and memorable they have ever experienced. For everyone else, it brought yet another reminder of how potent the combination of Benitez’s Liverpool and their Anfield home are on a European night.
Long may it continue.