A fantastic 4-0 cup win vs. Everton 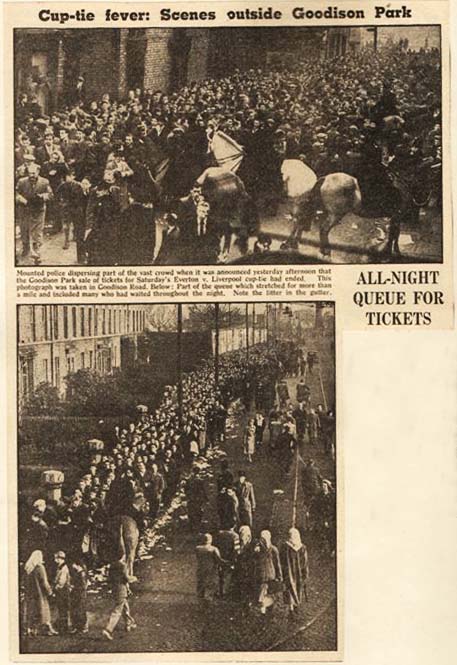 Mounted police dispersing part of the vast crowd when it was announced yesterday afternoon that the Goodison Park sale of tickets for Saturday's Everton v. Liverpool cup-tie had ended. This photograph was taken in Goodison Road. Below: Part of the queue that stretched for more than a mile and included many who had waited throughout the night. Note the litter in the gutter.

When Liverpool and Everton met in the fourth round of the FA Cup on 29th January 1955 the interest was immense. Liverpool had been relegated to the 2nd division in 1954, while Everton were in 1st division. This turned out to be one of the most surprising and most satisfying wins ever for Liverpool vs. their blue neighbours.

As this article from Sunday Express points out Billy was Liverpool's key man in this famous victory:

"It was as so many Liverpool victories have been, Billy Liddell's game. This great footballer steered the team to a two-goal lead from centre forward and when centre half Laurie Hughes was injured in the second half, he moved to left half. He then proved that he was Liverpool's best defender as well as their best forward. He picked off the Everton moves like ripe plums and still had time to make a goal."

The papers were full of praise for the Reds:

"The sensation of the season" - Liverpool hadn't won an away match this season. The result, a just and by no means fluky result, shows that they won by four to nothing! That deserves four exclamation marks....nay fourty-four! This is why I call this affair the sensation of the season and probably the most dramatic day in the long history of the famous Merseyside football "derby"."

Billy Liddell opened the scoring in the 18th minute, a goal which he later described as his greatest of the 228 goals he scored for the Reds as seen below (click on picture to enlarge) 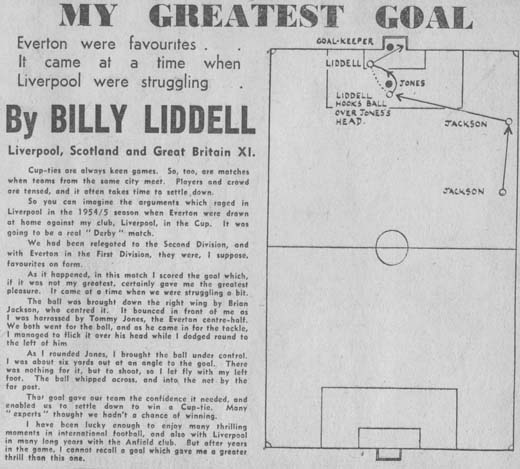 "Some chap wrote to the manager pointing out the way Everton's defence moved up to catch the opposition offside at free kicks. We worked on a move in which John Evans hung back, and then came through late to keep onside and it worked perfectly. John found himself all on his own and pulled the ball back for Alan A' Court to score. I had already scored to put us in front, and Alan's effort really finished them off. It was the only time I remember us practicing a set piece move, and we worked at it all week. Manager Don Welsh was so pleased he gave us 10 shillings each!"