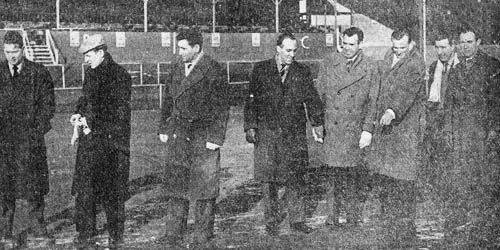 Liverpool players inspecting the pitch
prior to the postponed game on 10 January 1959.

It’s difficult to appreciate nowadays that Liverpool spent the years between 1954 and 1962 playing in the Second Division. Even so, Worcester City’s 2-1 victory over the Reds in the third round of the F.A. Cup on 15th January 1959 remains the club’s greatest-ever achievement.

City had reached this stage of the Cup for the first time ever by beating Brierley Hill in the fourth qualifying round, Chelmsford City in a replay and Millwall, who were hammered 5-2 here at the Lane.

The third round co-incided with a spell of bitterly cold weather, and it was not possible to play all 32 of the third round ties on the scheduled date of Saturday, 10th January, including the game at Worcester. As a consequence, there was a huge amount of media interest in the re-arranged fixture, which was played on the following Thursday afternoon. A temporary press box was erected on girders above the old main stand, and a club record home gate of over 15,000 was established, the game being played on the City’s early closing day.

There had been no real let-up in the weather, and the playing surface at the Lane had been coated with sand and salt prior to kick-off. There was no grass to be seen anywhere other than along the touchlines. But although the playing surface may have contributed to the first goal scored that afternoon, it generally played well and Liverpool didn’t use this as an excuse following the game.

The Reds were on a long unbeaten run at the time, challenging hard for promotion back to the top flight, but they gave City a big advantage by dropping the legendary Billy Liddell for the game.

Instead, it was another well-known name who made the headlines. City captain Roy Paul was outstanding that afternoon, exuding calmness and steadying those around him, although in fairness many of his City colleagues had also gained Football League experience with their previous clubs. However, it was the “baby” of the side, 18 year old winger Tommy Skuse, who set City on the way with a goal after just ten minutes.

City’s Eddie Wilcox hit a long, low pass into the Liverpool penalty area from the right. Defender Molyneux tried to pass the ball back to Tommy Younger, Liverpool’s Scottish international goalkeeper, who came out of his goal in search of the ball. It was a hasty and ill-directed effort by Molyneux, and when Younger realised that the ball wasn’t going where he had expected in to go, he too panicked, turned suddenly and made a lunge for a ball which he had no hope of claiming. The Liverpool goalkeeper lost his footing, and this allowed Skuse the time to nip in between goalkeeper and defender and drive the ball into an empty Canal end goal.

For the next 20 minutes, the difference in status between the two teams was apparent, but Melville, at centre-half, had the measure of visiting centre-forward Louis Bimpson. Gradually, City gained more possession of the ball, and reached the interval still a goal ahead. City’s John Kirkwood made a couple of fine saves and fully justified his reputation as the best goalkeeper outside the Football League.

The cold intensified in the second-half, but City held on to that advantage, and the clock slowly started to run down. Then, with eight minutes, another mistake led to City’s second goal. Striker Harry Knowles received a pass on the far wing from Bernard Gosling which Liverpool’s Dick White should have cut out before the ball reached its destination. Knowles cut inside and whipped the ball into the goalmouth, where White tried to atone for his error by cutting the cross out. Instead, he succeeded in lifting the ball back over the head of his own goalkeeper. Younger twisted in the air in an attempt to reach the deflected cross, but succeeded only in falling into the back of the net a split second after the ball too had landed there. 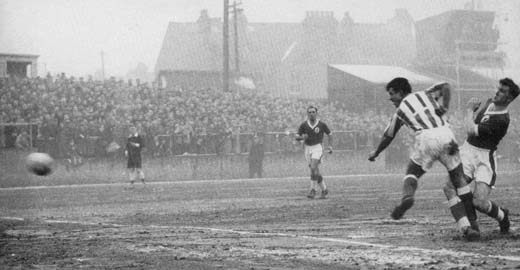 So, City were seemingly into the next round, with a home tie against Sheffield United to look forward to. But within two minutes of the re-start, Liverpool had pulled back a goal. Melville charged into Liverpool’s Freddie Morris in the penalty area, and Twentyman scored from the penalty spot. Melville claimed afterwards he had merely been trying to protect his goalkeeper from being battered by the in-rushing Liverpool man, and it was seem by most observers as a harsh decision. If truth, referee Leslie Tirebuck of Halifax had given just about every decision going against City over the course of the afternoon.

The final six minutes of the game will remain forever the longest six minutes witnessed by City supporters. The referee blew his whistle for a free-kick, and City fans began to leap the perimeter fence prematurely, as a consequence of which Police and officials had to shepherd fans back off the pitch. The next time Mr. Tirebuck put his whistle to his lips, it was to signal the end of the game, and this time there was no stopping the invasion. Mr. Tirebuck was apparently jostled by a section of the crowd, but was escorted safely off the field by four policemen.

Said Liverpool manager Phil Taylor afterwards: “Worcester deserved to win. They outfought us on a pitch that may have reduced the odds against them, but was still as good a playing surface as you can get in England right now. We lost because our forwards refused to fight.”

The next day, Fleet Street rolled out all the expected headlines – “What Sauce,” “Saucy Worcester” and “Worcester too Hot for Liverpool” as well as “Paul’s Part-Timers Smash Liverpool” and “Ten Thousand Leap the Barriers.”

Eight of the City players had been working that morning, and this proved to be the part-timers’ day of glory. City boss Bill Thompson had watched Liverpool three times and captain Roy Paul ensured that his tactics – that the City players should run for everything and unsettle their Division Two opponents – paid off to the letter.

Nine days later another Division Two side, Sheffield United, came down to the Lane for the fourth round tie, and as many had anticipated, lightning did not strike twice in the same place. They deservedly won the game 2-0.

Before the end of the year, Liverpool had parted company with manager Taylor and he was replaced by Bill Shankly. Maybe Liverpool’s rise to fame really did start on a freezing cold afternoon in Worcester. 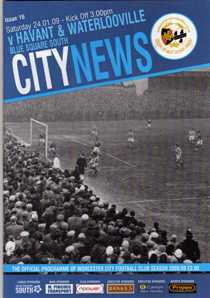 Worcester City produced a special programme for their game against Havant & Waterlooville on 24 January to commemorate the 50th anniversary of their famous 2-1 win over Liverpool in the F.A. Cup in 1959. The programme is devoted almost entirely to memories of the game and includes many photographs.

Copies are available from City's programme editor, Julian Pugh. The price is £2 - cheques should be made payable to worcester City F.C. - plus an A5 self addressed envelope with a first class stamp on it. Julian can be contacted at 97 Northwick Road, Worcester WR3 7EA.