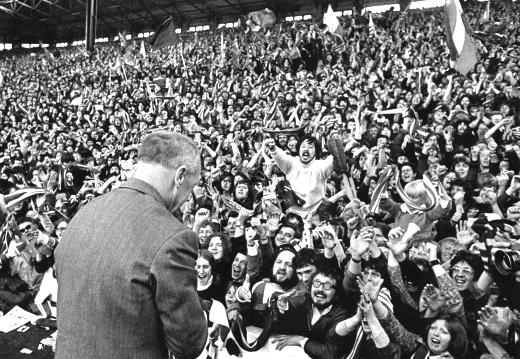 Shankly said his final goodbyes to Liverpool fans at his testimonial amid scenes that will be forever etched in everyone's memory who was so lucky to be at Anfield on Tuesday evening 29th April 1975. Shankly had been eagerly waiting for his big day since retiring from Liverpool 10 months earlier:

"I am glad the day has come. The worst thing in football is waiting for the match, but it's all right when it comes. It's been even greater for me than waiting for the Cup final. I feel easier now that the day has arrived. The build-up has been lengthy, there has been much hard work by the testimonial committee and I'm simply looking forward to going to Anfield to see the people I worked for all those years, who mean so much to me."

Liverpool had a strong line-up three days after the conclusion of Bob Paisley's first season as Liverpool's manager finishing second in the league two points behind Derby: Clemence, Neal, Smith, Thompson, Hughes, McDermott, Case, Callaghan, Cormack, Waddle, Keegan. Don Revie selected the opposition including Gordon Banks, Alan Ball, Liam Brady, Billy Bremner and Mick Channon amongst other internationals. Shankly was held in such high esteem that a very big crowd was expected for his benefit match irrespective of how the team was doing under his successor, Bob Paisley. Liverpool won 6-2 on the night although the result was not a big concern for spectators.

"I did not go to Gerry Byrne's Anfield testimonial match in April, 1970 which drew a staggering crowd of 41,000 for one of the club's most loyal employees. But I had been to Roger Hunt's testimonial match two years later on a night when even torrential rain couldn't prevent an attendance of over 55,000 with many thousands more locked outside.

There was no way I was going to miss Shankly's special night and considering what he had given us as supporters I expected an attendance in the region of Hunt's rather than Byrne's. I arrived at Anfield early expecting to see massive queues around the stadium but it soon became clear that the stadium's capacity would not be threatened and that everyone who wanted to get in would get in. The attendance was recorded as just under 40,000 which I thought was a little disappointing given everything Shankly had achieved between 1959 and 1974. I think the choice of opponents might have had something to do with the lowish crowd figure. If I attended a testimonial watch, I wanted to see a 'proper' match against recognised opponents. But Liverpool's opponents on the night only had the name of the individual who was managing them.

We all knew the final tribute would come at the end of the main match. Bill walked slowly around the stadium to the tumultuous acclaim of the supporters, many of whom had watched him build two great teams that won championships and cups. As he reached the Kop the decibel-count increased even further. I remember him standing near the goal in front of the huge terrace thanking the supporters as much as we were thanking him. There had been a regular chant in the 1960s about Shankly being our 'king'. As he walked in front of the Kop for one last time, a thunderous, repetitive roar broke out to the same tune of "You'll always be our King"; and so he was, at least until the next king arrived from Glasgow two and a bit years later!

I kept my match-programme and still have it somewhere. I kept my ticket-stub too (I was sitting in the Main Stand that night) for almost twenty years until I gave it and a small colour picture of Shankly sitting in a German dressing-room holding the UEFA cup to Kevin Keegan when he was manager of Fulham. Kevin of course was one of Shankly's favourite players and most important signings. He played against Revie's team in Shankly's testimonial match but he also played a massive part in Liverpool's re-emergence as a trophy-winning club in Shankly's last couple of years as manager. Bill's players will have their own memories of how he influenced and shaped their playing careers. Supporters have their own memories too of course. We gave Shankly a good send-off that night but I still feel a little disappointed over three decades later that more people didn't turn up to share his big night with him." 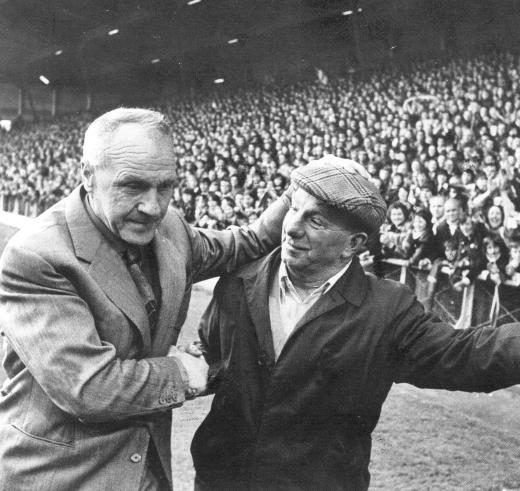 "Shanklyboy" was one of the Liverpool fans who was at Anfield that night and will never forget the atmosphere:

"The Kop was absolutely heaving that night. After the game Shanks came on the tannoy and was speaking to the fans. All around me I saw grown men openly weeping. I’m getting emotional just thinking about it now. There was one feller who used to stand by us. A great big bloke who wore the same donkey jacket for about 20 years. He was inconsolable. He managed to sit down on the steps and sobbed his heart out. Nobody tried to help him; we were all far too wrapped up in our own emotions. Anyway…..we all knew the score. If Bill Shankly had told us we were going to invade Poland……I can assure you it would have been done."