Two days before the epic Euro 2000 first leg encounter between Scotland and England at Hampden Park, Shankly.com met an upbeat Emlyn Hughes to discuss England's chances and, of course, recall memories of a certain Bill Shankly.

Glasgow City is not always the easiest place for an Englishman to be. When lady luck places you there on the eve of a Scotland versus England match at Hampden Park and you happen to be the proud owner of 62 England caps, 23 of them as captain, then the degree of difficulty can border on the plain hazardous. Still, this particular ex-captain flinches not one iota as the earnest hotel receptionist, anxious to call him to reception, inadvertently blows his cover by booming his famous name through the tannoy system. So much for keeping a low profile then.

You sense however, that it's all water off a duck's back as far as Emlyn Hughes is concerned. We shake hands, two Englishmen united in the lair of the tartan enemy.

"I wish I was playing on Saturday. I used to love coming up to Hampden and playing against the Jocks. It was the same when I played against Everton for Liverpool. It always meant more to me going to Goodison and beating them in their own back yard, knowing that everyone was on your back. I scored four times against Everton at Goodison over the years."

Here, you sense, is a man who relishes a challenge. Still looking fit enough to be playing, Hughes reveals his passion for football with every sentence he speaks, praising and slaughtering in turns those he deems deserving. It's the same passion that was famously evident in his playing days when he earned himself the nickname 'Crazy Horse' and won the hearts of thousands of kopites in those long gone days of the '60s and '70s.

Signed by Shankly for Liverpool in 1967 from Blackpool, Hughes made an immediate hit with the fans who appreciated and admired his all action style and commitment. Shankly, too, had made an immediate 'hit' of his own with Emlyn.

"We had to get to Lytham St Anne's to complete the signing so I could play straight away in Liverpool's next match and Shanks drove us both down there. It's only about 10 minutes from Bloomfield Road, but he was the worst driver in the world. He had this old brown Corsair and just as we left the ground he half went through a set of lights and a woman shunted into the back of us and smashed all the lights in. They got out of their cars and exchanged numbers and so on then we carried on. Next thing, a police car flags us down and the young officer comes up to the car and Shanks winds down the window. 'What is it officer?' he asked, 'I'm sorry sir you can't continue the journey in that car as you've got no lights'. said the policeman. Shanks explained what had happened but the cop was having none of it. 'Do you know who's in this car?', said Shanks, and I thought he was doing the old do you know who I am routine. 'No' said the officer, 'I don't recognise you.' 'No not me you fool', he said, 'I've got the future captain of England alongside me.'"

The story speaks volumes about Shankly, about his childlike enthusiasm for football, and of course the impatience he had with those who didn't share it.

"You couldn't not sign for him. He believed so much in what he did. The big fallacy about Shanks was that he was a great coach. He wasn't, but he was a great manager. He knew how to motivate. He would buy players who were already set in their ways. How could you coach Kevin Keegan, or Peter Thompson or Ian St. John? What we were coached in was control and passing."

The signing was a rare foray into the market for Shanks at that particular time. Hughes, Alun Evans and Tony Hateley were the only major purchases by the club from 1965 to 1969 as Shanks held on to the players who had brought the club back to the forefront of domestic glory in the mid sixties.

Hughes, as much as anyone, provided the dynamism that helped Shankly shape the next phase of the Liverpool story. The old guard who had served so well had had their day and the likes of Ron Yeats, Tommy Lawrence, St. John, Roger Hunt, and Thompson gave way to Hughes, Ray Clemence, John Toshack, Keegan and Steve Heighway. It was far from a smooth transformation from one great side to another though as the successful 1960s team were allowed to roll on a year or two past their best. Indeed between 1966 and 1973 Shankly's Liverpool, though always challenging, remained trophy-less. The advent of the '70s saw fortunes rise again and with the League Championship and UEFA Cup double in the bag in 1972-73, Shankly decided to transfer the captaincy from Tommy Smith to Emlyn Hughes for the following season. The Reds duly lifted the F.A. Cup in Shankly's final game in charge in May 1974.

The great European nights returned to Anfield and Emlyn was at last given a glimpse of what the previous crop of players had experienced at Liverpool.

"I'd missed those European glory nights in the sixties that the other lads at the club were always talking about. I never really knew what they meant until the night we played St Etienne in the European Cup quarter final in 1977. There was steam coming off the kop that night and the crowd were surging backwards and forwards."

That night came almost three years after Shanks had departed the club. His sudden retirement in July 1974 had taken everyone by surprise, and is a puzzle that continues to frustrate. Emlyn Hughes remains at a loss to understand the departure but as he explains, there was possibly more to the matter than has ever been publicly acknowledged.

"We don't know what pressures were on him and it's impossible to know exactly what his reasons were but I used to keep in touch with him after he'd retired and I went to see him every day after training. One day he asked me if I wanted a drink, and I said 'yes please I'll have a cup of tea'. 'No' he said, 'I mean a proper drink. I want to tell you the real reason why I left Liverpool.' I said 'no boss you don't have to, I don't want to know', but he insisted. He asked Ness to go and get us a couple of whiskies and we retired to the front room of his house. Ness brought the drinks through and just as we settled down the doorbell rang. It was his daughter with the two grandkids and that was that. The moment had gone. He never did tell me and I never ever asked." 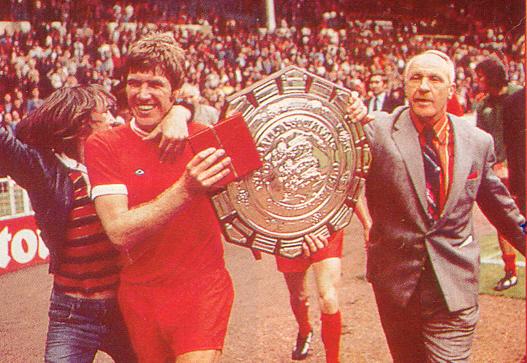 What Shankly was about to tell we can only imagine but it seems certain that we are destined never to know. Hughes remained an integral part of the set up under Bob Paisley and lifted the European Cup on that never to be forgotten night in Rome in May 1977, a full ten years on from the comical car journey from Blackpool to Lytham St Anne's. Perhaps inevitably though, Hughes remained a Shankly man and never enjoyed the same intimacy of relationship with Paisley.

In 1979 Emlyn was sold to Wolves and his career eventually wound down after a player-manager stint at Rotherham in the early 1980s.

"I played at Liverpool for thirteen years and in that time there were three, possibly four, truly great players at the club. Kevin Keegan, Kenny Dalglish, and Graeme Souness. You could probably add Ray Clemence to that list. Kenny was the greatest, no doubt about that. Some would add Hunt and St. John but they were probably past their best when I arrived."

Thoughts turn inevitably to the forthcoming 'Battle of Britain' and Emlyn expresses hope that Kevin Keegan will be preaching the old Shankly maxims to his England side ahead of Saturday's first leg at Hampden.

"There's so much garbage talked by so called experts and pundits nowadays. I get sick of hearing about systems and wing backs and zonal marking and so on. Basically, all we needed 25 or 30 years ago was control and passing but that's gone out of the game now. You have to be an athlete to play football these days. We had a reputation for being extremely fit but that was because we never did any training! You see teams now do 8 mile runs but when do you ever need to run 8 miles during a game? Everything we did was with a ball. Shanks used to say to us before we went out, 'Remember lads, the goals never move'. What he meant was that if you defend the goals then you don't get beaten. Nobody ever got round the outside of us because we defended so thoroughly. Ray Clemence could deal with 25 yards shots all game."

A discarded newspaper in the hotel bar carries an interview with an 'ex pro' who offers his advice to the respective management of the Scotland and England national teams. "Some of these guys are lunatics", says Hughes with a dismissive wave and with our brief meeting over, he dashes off to honour another engagement. You suspect that there is at least one Englishman in Glasgow tonight who Shanks would have approved of, an Englishman who used to love playing at Hampden.

© LFChistory.net - interview in November 1999 for Shankly.com