I was only fifteen and playing in a five-a-side game at Melwood. I nutmegged Gerry Byrne and scored and I was on top of the world. A couple of minutes later a ball dropped between us, I went to head it and Gerry headed me and I went down with a gashed eye. As I lay on the ground covered in blood, Bill Shankly strolled across, looked down at me and said 'Lesson number one, never nutmeg Gerry Byrne son and think you can get away with it."

The lesson was absorbed and a footballing hero was born.

Tommy Smith had learned the value of reputation and it was a lesson he would always remember. At the raw age of fifteen Smith had barely started his Liverpool footballing career yet already he was experiencing the Bill Shankly revolution, the revolution that was going to sweep him and the club he idolised onto untold domestic and European glory. Smith had been a successful local schoolboy and joined Liverpool when, at the age of fourteen, his mother had brought him to Anfield in December 1959, to meet the new manager, Mr. Shankly. After serving a colourful apprenticeship for two years, which included general dogsbody duties such as painting the Kop and raking top soil on the pitch, Smithy was soon pushing for a first team spot.

Tommy had been a precocious goal scoring forward in his youth and soon made his mark in the reserves, where he played several games alongside boyhood hero Billy Liddel who was in the twilight of his own glittering career.

"Shanks gave me some advice early on which I clung on to throughout my career. He told me never to take any shit from anyone, and when I thought I was good enough to play for the first team, I acted on that advice and marched into his office to ask when I would be getting a game. He told me my time would come and that I had to be patient but in such a way that I came out of the office thinking I was the best thing since sliced bread." 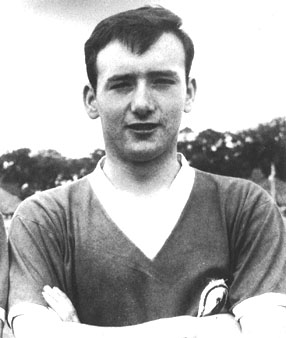 Shankly always had a way of disarming angry players who demanded to see him about injustices they felt were harming their progress. He would let the player down whilst at the same time managing to build up the player's confidence and self esteem. It was all part of what Tommy Smith refers to as 'The Edge'.

"He would always be looking for whatever it was that would give us the edge. In those days reputation was a big thing. If you could win a game before you went out, win it. That could mean winning it in the papers by saying certain things or by not saying certain things. You got very crafty at the game."

The famous psychology employed by Shankly was all part of this attempt to get the edge too. He was known equally well for pulling down the opposition players as much as he was for building up the confidence of his own.

"He would do all that stuff rubbishing the opposition and he always met them when they arrived and watched them all get off their team bus."

The story of how he told a young and inexperienced Kevin Keegan that he'd just seen Bobby Moore getting off the bus 'he's been at the drink, got dodgy knees, and he's got dandruff' springs to mind as one of the most humorous examples of this trait, but as Tommy Smith points out, there was often a method in the madness.

"He would go into the opposition dressing room half an hour before kick off just to wish them all the best. Whilst in there, he would be taking everything in. He would only be in there for a minute or two then he would be back in with us saying things like 'Now look, the right back's got his right ankle strapped up, the winger's got a bandage on his elbow', just little weaknesses they might have that once again would give you a little something as you ran out onto the pitch."

Indeed Smith can remember only one occasion when the famous Shankly bravado was missing. Back in 1964-65, Liverpool were enjoying their first ever European campaign. After pushing aside Icelandic side Reykjavik in the first round of the European Cup, Liverpool were drawn against crack Belgian outfit Anderlecht.

"The only time I ever saw him with a lack of confidence, truthfully and honestly, was when I made my European debut against Anderlecht in 1964. Shanks was worried because he'd seen Belgium play England a few days earlier. They had drawn 3:3 and a lot of the Anderlecht side had played for their country at Wembley. They had some great players at the time. In the team meeting he read out the team and when he got past the wing back positions, where I had been playing in the reserves, and into the midfield I thought I'm not in the side at all. Then he got to number 10 and he said 'Tommy Smith'. He told me I was playing at the back and that I was to be Ron Yeats' right leg. Whether it confused the Belgians or not I don't know but for twenty minutes I was being marked by their number 4."

It would not take a huge leap of imagination to credit Shankly with deliberately causing the confusion in the Belgian ranks by playing a 'number 10' at the back. Nobody would bat an eyelid these days of course, with the advent of squad numbers and the demise of the old familiar 1-11 system, but back in the 60s such moves were innovative and audacious. It was something Liverpool fans would see in later years too, with Ray Kennedy famously playing on the left side of midfield with a number '5' on his back.

Either way, Liverpool wearing their new all-red strip for the first time, gave Anderlecht a chasing that night and ran out 3:0 winners. During the game Tommy Smith remembers an incident when he gained a greater understanding of Shankly's 'edge'.

"They had a lad who could really play a bit, Van Himst his name was. I slammed into him early on and as he got up, he pointed to his head, and said 'Loco' to me. I was determined to show Shanks I was up for the task. Of course, Shanks was full of it after the game, telling us how poor the Belgians were and how they couldn't even beat England, but he hadn't been like that before the kick off."