Is Reina the best keeper in Liverpool's history? 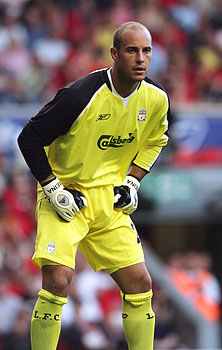 Greatness in football is always hard to measure. You can go on the player’s stats or the number of trophies won in his career. Statistics are often the measure used by fans who don’t have live memories of player’s performances to go back on and the size of a player’s medal cabinet doesn’t necessarily correspond to his talent. But going on these measures alone discounts a lot of variables found within the beautiful game, such as individual pieces of skill that are not in record books. Because of this the title of ‘the greatest...’ often provokes serious debate among fans.
Take the mantle of Liverpool’s greatest goalkeeper for example. Elisha Scott’s and Sam Hardy’s case has already been argued in a previous article but their average of 1.38 and 1.42 goals conceded per game doesn’t even make it into the top three.
If we look at goalkeeper’s averages we can discover which goalkeeper has the best ever average. Note that Reina's average on that list does not include the current season and that keepers who made less than 30 appearances have been omitted to give a valid average.
It may or may not be surprising that current Reds number one Jose Reina is the one who tops the statistical pile with an impressive 0.70 goals per game average from conceding 129 goals in 184 appearances.
Second to Reina is Ray Clemence just behind with 0.75 and Bruce Grobbelaar third with 0.85 average. They played a combined total of 1,293 times for Liverpool in the best sides in the club’s history. Clemence won 18 major honours with Liverpool while his successor, Grobbelaar, won 19. These dwarf Reina’s current honours tally of 3.
Spare a thought though for Russell Crossley, whose 138 goals conceded from 73 appearances between 1947-54 leaves him bottom of the pile. It may not come as a surprise that the Reds were relegated to Second Division in Crossley’s final year at the club.

Russell Crossley and Bruce Grobbelaar took a very different path
So is Reina the best? Well, he currently plays in a side with a realistic chance of the Premier League title and has been remarkably consistent in each of his three full seasons at Liverpool - even if the defenders in front of him have changed.
In his first season he kept 30 clean sheets in 53 appearances, a clean sheets to games ratio of 56.6%. In front of Reina that year was the settled and solid defensive four of Sami Hyppia (59 apps), Jamie Carragher (57 apps), John Arne Riise and Steve Finnan (both 52 apps). Young full backs Dijimi Traore and Stephen Warnock also made significant contributions to Liverpool’s defence that season. Behind that defence Reina broke the record for consecutive Premier League clean sheets (6) and consecutive clean sheets (11) between 29th October and 15th December.
The following season Reina kept 26 shut outs in 51 appearances at 50.1%. Carragher, Riise and Finnan again made up most of the back four with 51, 48 and 47 appearances respectively. The ageing Sami Hyppia played 29, sharing his defensive duties with Daniel Agger who played 43 games in his first full season at the club.
On 9th December 2006 Reina played his 50th full League game, keeping his 28th clean sheet, breaking the club record which had previously been held by Clemence, Grobbelaar and Dudek, who kept 25 clean sheets (stats from Ged Rea).
In 2007/08 Reina kept 24 clean sheets in 52 appearances, an average of 46.2%. Carragher again was the most played defender (55 apps), with Hyypia, Riise (both 44 apps) and Arbeloa (41) making up the back four on most occasions. Martin Skrtel joined in January and made 20 appearances towards the end of the campaign. 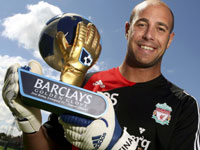 So far this year Reina has kept 15 clean sheets in 32 games which is 46.6%. Jamie Carragher is again the most consistent player in defence; he joins Reina as the only player to have played every minute in the Premier League this season. Injury to Martin Skrtel means Hyypia and Agger have partnered Carragher. But this year has arguably been the most unsettled in the defence with Andrea Dossena, Alvaro Arbeloa, Fabio Aurelio and Emiliano Insua all making up the full back positions, which perhaps could explain why Reina’s percentage clean sheets is lower than his normal average.
To sum up Reina has shown a remarkable level of consistency in his three and half years at the club with his clean sheets to appearances records always around the 50% mark. Remarkably he has won the Premier League's Golden Glove, awarded to the keeper that keeps most clean sheets a season, for three seasons running.
However credit also has to go to the defence, in particularly the central defence. In the main only four players: Hyypia, Carragher, Skrtel and Agger, have formed the back defensive pairing in the past three and a half years - Hyypia and Carragher in particular being the favoured partnership. It is no coincidence that Reina’s best season in terms of clean sheets, 2005-06, was when Liverpool had their most consistent back four.
A true great is someone who can produce the goods over a long period of time, playing with a number of different players. Therefore his performances so far can only really be considered as a great platform, albeit one which could see him eventually eclipse Clemence and Grobbelaar in the future.
If after 5 years and a number of league titles later, Reina is still keeping clean sheets, then maybe he can join that list of all time greats – whatever the measure.
Written for LFChistory.net by Tom Mallows