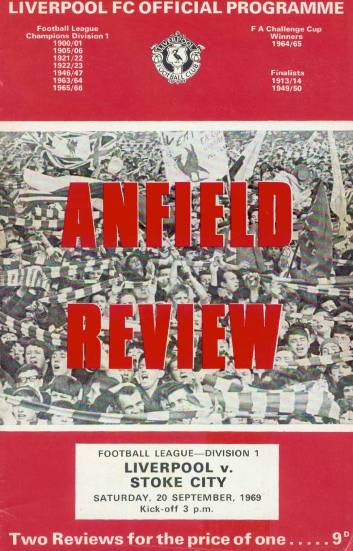 Stoke City's promotion last season sees them return to the top division in England for the first time in 23 years. Their match at Anfield takes place on September 20th. They also played at Anfield on this exact date in 1969 which was quite a historical period for both clubs.

On the previous Tuesday Liverpool had hosted Dundalk in a Fairs Cup match and won 10-0 which was the club's all time record score at the time. Surprisingly the match programme for the visit of Stoke does not even mention this achievement. The Dundalk game was also the first time that future manager Gerard Houllier attended a game at the stadium. He went on the Kop with Patrice Bergues and later recalled, "I suppose going to the game with Patrice that day was a touch of destiny. Patrice had come over to spend a few days with me because I was here on my own, and so we decided to and see Liverpool play Dundalk. What impressed me first of all was the atmosphere inside the stadium. We were on the Kop, and it was fantastic to see the unconditioned support of the fans. I was also impressed by the energy which was shown in the game, and the stamina of the players. I think 15 minutes before the end of the match the score was 8-0 and still Liverpool went looking for goals. In fact the score at half-time was 5-0. In France, if you are 5-0 up at half-time the game is over in the sense that you don't bother trying to increase your score. It's not like that in England."

It was also an exciting time for Stoke who were in eighth spot at the time as they had a visit from Pele's Santos at the Victoria Ground on the following Monday. Santos won this match 3-2 with Pele scoring twice which helped him get nearer the 1,000 goals scored mark which he achieved in November of this year.

For Stoke's visit Liverpool produced their typical 16 page Anfield Review which also contained a 20 page insert "Football League Review", that appeared in a lot of clubs programmes at the time. Page three had a brief article commenting on how Liverpool's goals were being shared out throughout the side. Pages 4 and 5 have a welcome to the visitors. The Stoke side of the time contained Gordon Banks, Mike Pejic, Dennis Smith, Jimmy Greenhoff, Peter Dobing and George Eastham. 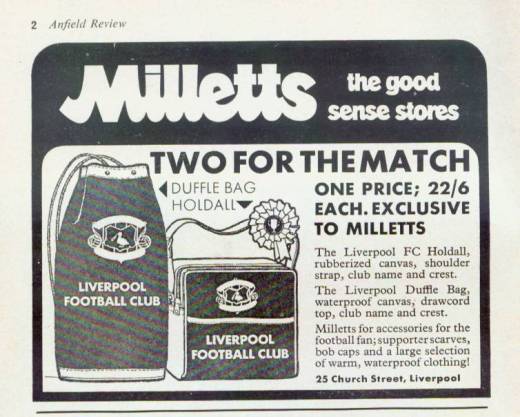 Don't tell me you didn't by a holdall or a duffle bag...

The next two pages contain statistics and comments on the reserve sides. A recent signing, Larry Lloyd had just got his first goals for the club in a reserve fixture. Page 9 has a feature on the visiting captain Peter Dobing. This mentions that Stoke were "using this quiet pipe smoking player" more as a midfield player than a striker. The remainder of the programme contains further statistics and adverts. The line ups appear on the back page together with the half-time scoreboard.