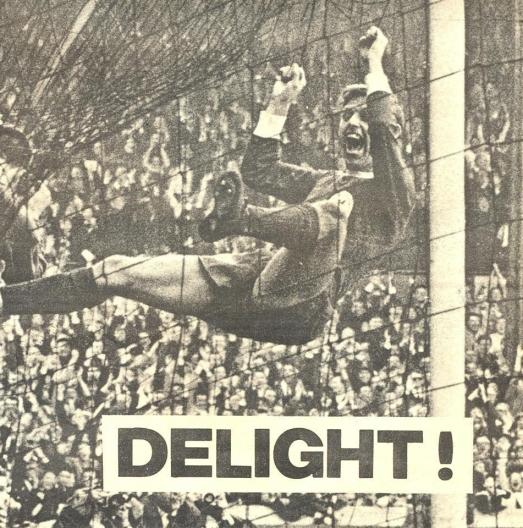 All the gates except for ticket holders, were closed half-an-hour before the kick-off, and just before the teams came out a Liverpool fan emerged from the packed Kop and went to the centre of the field, where he planted a replica of the Championship trophy on the centre spot.

There was no doubt who Chelsea thought were going to be champions because they came out first and lined up in two rows and applauded the Liverpool players as they ran between them on to the pitch.

Liverpool defending the Kop, got a quick free-kick when St. John was impeded by Hinton, but from this Yeats could not reach Stevenson's lob. Chelsea were moving the ball quickly. A brilliant piece of work by Osgood took him beyond two players and Houseman's shot from the pass was not very wide. St. John got up to reach a Thompson corner, but his header went straight at Dunn who made a fine save. Chelsea were always willing to open out the game and were particularily dangerous on the left. They got another free kick near the edge of the penalty area, but this time the shot was only half hit and did not even reach Lawrence.

A dangerous cross from Robson was cut off by Yeats, and when Liverpool got a free kick on the left St. John headed the ball across the Chelsea goalmouth, with no other Liverpool player where to take what would have been a gift.

Osgood was lying deep, and many of the good-looking moves began with him, but there was little finishing power from the Londoners. Osgood slipped a through pass in front of Tambling and the inside right, from near the edge of the penalty area, lashed the ball first time just over the angle. This was a good move, and the Liverpool defence was not too confident dealing with these fine passes from Osgood. Liverpool were striving hard enough, but they were against a defence which was playing cooly and competently, and all St. John's efforts could not create an opening.

We were not getting much action, but Chelsea were in luck when Hunt made his own opening and then cracked a right-footer which hit the inside of the post and rebounded into Dunn's arms. He looked as surprised as anybody that the ball was in his arms and not in the net. Liverpool had done most of the pressing, but although this Chelsea defence had been hard put to on occasions to hold them it had also played well. 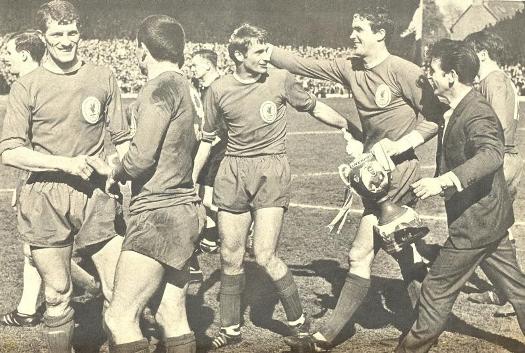 Liverpool went ahead in 48 minutes and it looked like an own goal from Dunn. Byrne got possession in midfield and slid the ball through for Hunt. The Liverpool man took it almost to the line before pulling it back and the next thing we knew was the ball in the net. One must assume that it struck Dunn and rebounded in, although, the Liverpool players gave their congratulations to Hunt.

Naturally the Kop was in an uproar, and they nearly had cause for more celebration when St. John bore down the left and saw his shot hit a defender and glance outside for a corner. And from this Liverpool almost scored, because Yeats' header was sneaking in at the angle when Dunn went up to make a good catch. The atmosphere was here now in full measure and how Stephenson missed connecting from six yards was amazing.

Dunn made a fine leap put to stop Callaghan's cross reaching St. John, then, while Robson was lying injured Smith went on from a pass by the winger only to stub his shot and give Dunn an easy pick up. Offside twice, and then the long leg of Yeats stopped Chelsea in their tracks. But it was Liverpool who were doing the attacking, and a shot from Stevenson slewed well wide, while St. John's effort to get his head to Callaghan's chip was foiled by Hinton.

Yeats came up to make a header which passed over and then Chelsea grabbed a surprise equalizer in the 62nd minute. Tambling switched the ball down the right and Murray outpaced Yeats and then guided it into the net as Lawrence came out. 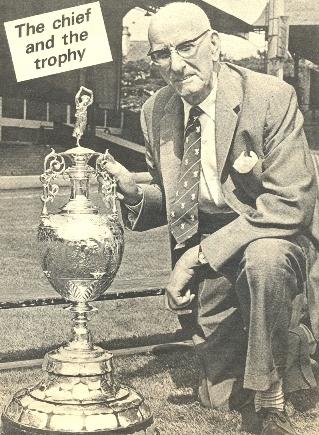 Chelsea became more menacing after their goal and a mistake by Yeats very nearly let in Robson, who retrieved the situation for Liverpool by trying to take the ball forward instead of shooting first time when Lawrence was off his line.

But Liverpool went into the lead again in 69 minutes and this was a fine goal. Hunt beat one man and then came right and then went left again, leaving him with the chance to make a left foot shot. He hit this hard and low and although Dunn partly made a stop, the power was too much and the ball rolled on over the line. This set up the Kop off again and they gave us pretty well their whole repertoire.

They groaned when a St. John header slipped outside instead of inside the post because if anyone deserved to score it was St. John, who had played so well. It had now become a case really of waiting for the end because Chelsea were not getting within range and Liverpool, too, were happy to coast along. One can hardly blame them in the view of the tough job at Hampden Park on Thursday night.

With minutes left the Kop began their: "Ee-aye-addio, we've won the League" chant. 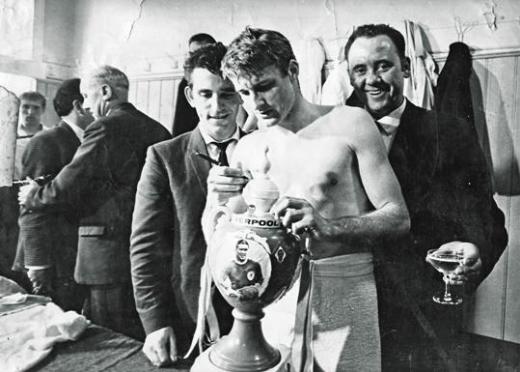 Sir Roger, who scored Liverpool's both goals, signs the home-made cup for its creators

When the final whistle went, several Liverpool supporters raced on to the pitch, and as Yeats was congratulated by the Chelsea players one boy gave him a replica of the trophy. Manager Bill Shankly came on to the pitch to join his players and he congratulated each one of them in turn. Then the players went on a lap of honour and the sight as they reached the Kop was a tremendous kaleidoscope of red and white colours.

I doubt if anywhere else in the world could a football ground produce scenes like these. After running round the ground the players lined up in the middle of the field and when the crowd chanted: "Geoff Strong, Geoff Strong", he came out from the tunnel limping and joined them. His reception too, was terrific.