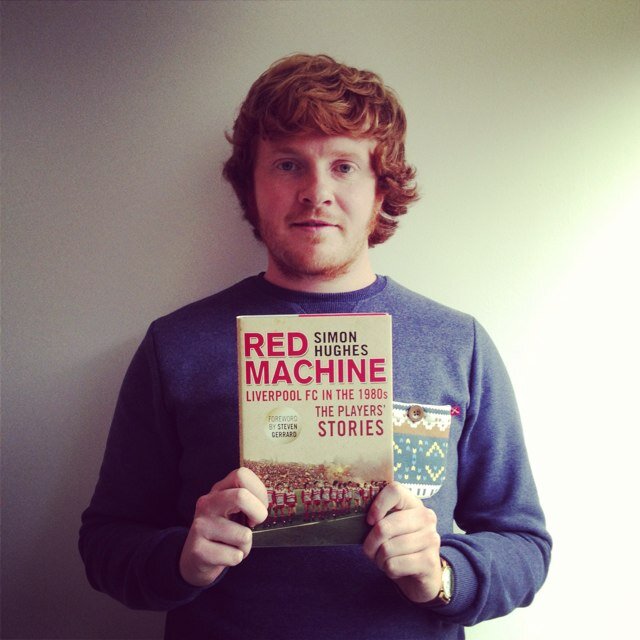 "Red Machine: Liverpool FC in the '80s: The Players' Stories". By Simon Hughes
Published by the Mainstream Publishing Company

Simon Hughes is a well-known and well-respected journalist/author who is particular known in Liverpool Football Club circles for his extraordinary 2011 book about the club’s chief scout Geoff Twentyman (Secret Diary of a Liverpool Scout) . Anyone who read and enjoyed that book will know that Mister Hughes always researches his subject matter diligently and thoroughly, something he again proves with this latest book about some of the players’ stories from a decade in which the club added thirteen major trophies to the nine collected in the previous decade.

A cynic might ask what can anybody possibly tell us about Liverpool in the 1980s that has not already been told, in some cases many times ? The answer is plenty. Simon has selected ten players from an extraordinary decade of success, to which he has added a glimpse of the valuable knowledge of Ronnie Moran, whose chapter comes under the heading of Disciplinarian, a word many of the players interviewed firmly agree with. The author chose Moran deliberately because he is “the only person still alive with genuine inside knowledge that can contribute towards explaining why the club sustained the culture of success for so long and the mindset behind the staff that helped make the decade become Liverpool’s most dominant in terms of trophies”.

The choice of players is interesting because it is doubtful if anyone else (journalist, past/present player or supporter) would have picked the same ten men. At least four of the ten have either penned their own autobiographies or had biographies written about their careers. In that respect maybe there isn’t too much new to learn from guys who have been interviewed at length many times before. It is the choice of some less familiar names that make this book so fascinating … with the inclusion of Howard Gayle, David Hodgson, Kevin Sheedy and Steve Staunton. These are the men whose contribution was “comparatively minor” when compared to the “significant role” of the superstars like Bruce Grobbelaar and John Barnes. But all ten contributed something worthwhile and most left the club with something tangible in the form of medals; Gayle played in Liverpool’s first team only 5 times, all in the 1980-81 season, but still has a European cup winners’ medal; and although the Liverpool careers of Nigel Spackman (63 matches), Michael Robinson (52 matches) and David Hodgson (49 matches) were brief when compared to Grobbelaar (628) and Barnes (407), they too moved on from Anfield with medals to prove the impact they made. If there is an ‘odd man out’ in this collection it has to be Kevin Sheedy because “there is no other player in the history of Liverpool to have become an undisputed top-class player elsewhere having been disregarded by the club following just a handful of first-team appearances”. The player himself admits honestly : “I was probably at the right club at the wrong time”, a sentiment echoed to some degree by Steve Staunton, whose return from Aston Villa in 1998 “proved to be the wrong decision”.

Both Gayle and Barnes speak candidly about racism with the big difference being that “while Gayle was used to confronting racism for as long as he can remember, Barnes did not have to”, not when he was growing up anyway. A lot of the players were asked at clubs they moved on to what was the secret of Liverpool’s phenomenal run of success. The trite answer is that there was no secret, that (Steve Staunton’s words) “Liverpool was a family club, everybody stuck together and that’s why we achieved so much success”. But even Ronnie Moran, who has consistently refused to put his name to any book since retiring in 1998, was cautious about giving too much away because when his interview with Simon was over he enquired : “I haven’t let too much slip there, have I ?”.

There is a refreshing honesty about all the interviewees and even from the men about whom books have been written before there is still something new to learn. Most readers will already know about Bruce Grobbelaar’s background … and Craig Johnston’s … and that Michael Robinson has gone on to have a very successful media career in Spain. Robinson wondrously describes the moment he tried to get new manager Joe Fagan to explain what his role would be in the team. Fagan’s reply was simplicity itself “”When we get the ball we try to kick it to someone dressed the same colour as us; As a forward, Michael, kick it in the net and if you can’t, kick it to someone who can”. There are little gems like that throughout this book.

But there is a serious side to all these interviews as well. Grobbelaar knows that war “teaches you to appreciate life and all the good things that come with it”; and Staunton, while playing in only 55% of the competitive matches in the 1988-89 season as his days as a teenager came to a close, remains haunted by what he saw at Hillsborough and still thinks about it most days long after the initial ‘shell-shock’ had worn off. The Irishman also brings an interesting insight into why so many of his former team-mates have chosen media careers rather than move into football management as he did : “A lot of the lads are pundits now. Maybe they could see how it changed Kenny ?”. Being a manager is far more risky than being a pundit though, as Steve adds : “You have to worry about your job 24/7 because the sack is only a couple of results away”.

These ten men touched greatness in the 1980s, even if the time it lasted was shorter for some than for others. If it was a golden time to be a Liverpool supporter, the same can be said for the players and, in Ronnie Moran’s case, a member of the backroom team. Along with all the glory came two terrible and avoidable tragedies, events that cast a huge shadow over everything the football club stood for. Those who were in Brussels … and Sheffield … can never forget what they experienced on those days. It is easy to think that the players exist in a protected bubble. But as human beings they are the same as we all are and share our emotions both good and bad. Simon Hughes has got to the very core of these men, all of whom were “bracingly candid and generally comfortable to admit their own weaknesses” as they talked about their lives and careers. Craig Johnston speaks disparagingly about himself in declaring that he was “the worst player in the best team in the world”. Craig made an extraordinary journey before he could pull that famous red shirt on, as did a lot of these guys as they aimed for the stars and in many cases reached them. This book encapsulates the lives of some famous and some not-so-famous players who wore the liver bird on their chests with pride. With varying degrees of success, sure. But they still carried the hopes and dreams of the supporters on their young shoulders. And they should be remembered even if their time at the club was brief. They are remembered here and they deserve to be. The author could have made several different selections of ten men to satisfy the criterion he laid down for himself in the book’s title. Whichever ten he chose, it is doubtful if he could have done a better job than the one he achieved with the men he went with. These individual stories are about honesty with a very big capital H. Readers will be thrilled to learn so much more about the life of a professional footballer at a big and successful club.