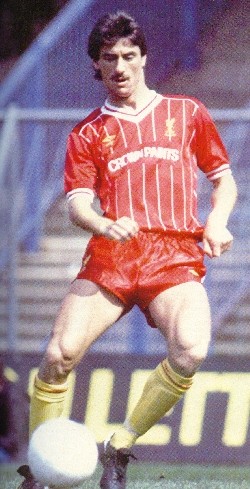 Liverpool defeated Luton Town in October 1983 in the treble season when the Reds won the European Cup, League title and the League Cup. Rush scored an incredible 47 goals in this season and five on this occasion vs. Luton. This is the match report from this historic game in October 1983.

Liverpool destroyed Luton with an avalanche of goals at Anfield this afternoon. Ian Rush hitting five and Kenny Dalglish also joining in the champions super-show.

The Reds made two changes from the side that put four goals past Brentford in midweek. Rush, rested for the Milk Cup tie, returned up front in place of Hodgson, who was named as substitute. Nicol won the battle for the left midfield slot, replacing the suspended Johnston. Manager Fagan had fought long and hard about the possibilty of recalling Whelan, fit again after his pelvic operation, but finally banked on the young player who scored that superb winner at Q.P.R. last week.

The visitors were boosted by the return up front of England U-21 star Walsh, who had served out a two match ban.

The champions got off to a flying start, taking the lead after just 75 seconds with a goal from Rush. It was the Reds' first attack and full-back Neal tried a low shot from 20 yards that was actually blocked by the Welsh international in the area. The ball fell to Lee, who attempted to turn it back in but it dropped loose to Rush, who scored from close range.

It was a lightning strike and before Luton could catch their breath they found themselves two goals in arrears. The Reds had gained a free kick to the right of the box, played short by Lee and Dalglish. He chipped in a perfect centre, skipper Souness arriving to a direct a header against the crossbar. As the ball dropped, Rush was perfectly positioned to grab his second goal from close range.

We saw six goals in this encounter last season when the sides drew 3-3, but Liverpool had only scored four goals in their opening four League games at Anfield this season. The double strike by Rush changed all that, and the Welshman seemed in the mood to get a bundle. He latched on to a ball from Dalglish to the left of the box, before hammering an angled shot across the face of goal and just wide of the post.

The Reds came forward again when Lee tried his luck from 25 yards with Sealey clawing the ball round the post for a corner. It was virtually shots in, with Sealey feeling as if he was one on the wrong end of a coconut shy in the Luton goal. A stunning shot from Lee looked a goal all the way until it crashed into the side netting.

But the Liverpool fans didn't have to wait long for their side's third goal, Rush grabbing his hat-trick in style after 36 minutes. Nicol had reached the goal line on the left and his pinpoint cross was headed home firmly by the delighted Welshman.

Poor Sealey was shell-shocked in the visitor's goal and it showed inside two minutes when he blundered badly to give Liverpool their fourth goal. Dalglish had tried a low shot that seemed to be covered all the way by the keeper, but the ball bobbled over his body and into the net.

The first half had been a sunshine carnival for the champions and total frustration for the visitors who arrived on Merseyside in good spirits and fourth place in the League. The despair showed when skipper Horton sent Neal tumbling with an over-robust challenge for which he was booked.

It didn't take Liverpool long to get back into their stride after the break. Robinson showed his pace down the right, crossing in hard and low only for Horton to make an important interception and clear his lines. A long and high ball towards the box sent the tide of red shirts towards the the visitors goal once again. Dalglish showed his vision, heading back a perfect ball into the path of Nicol whose first-time effort went straight into the arms of Sealey.

Liverpool's emphatic response was to sweep into a 5-0 lead after 55 minutes with the best goal of the game from the rampant Rush. Kennedy had floated a long ball into the box and the striker arrived to meet it first time with a stunning right foot volley that gave Sealey no chance at all. The vistors were demoralised by the efficiency of the Welshman's finishing. When the visitors did find themselves with a shooting opportunity, Hill sliced his effort well wide of the target.

Nicol looked for a penalty when he was brought down in the area by Elliott. All he got was a corner on the left, but the Scottish under-21 international almost turned that into another goal. Dalglish played it short, and the midfield man hit a tremendous shot that was well saved by Sealey. A rare attack from the unhappy visitors saw Hill's header deflected over for a corner on the left. Horton's free kick was cleared with little difficulty, but there was an anxious moment for the Reds when Rush needed treatment after being caught by Antic.

To the relief of the crowd, the four-goal hero was soon back. The Reds should have made it 6-0 when Robinson did well to to beat Antic with a speedy run into the Luton area, only to somehow slice his right foot shot well wide. with just two mins left, Souness had a pointblank effort blocked by Sealey, Rush being on hand once again to rap in his fifth to make it 6-0.