You'll never get past Sissoko! - comparison with Alonso 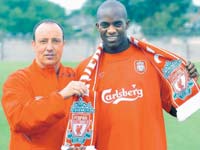 The question many ask whenever Momo Sissoko is in the Liverpool team is whether the side is better or worse for his inclusion. He often plays as part of a five man midfield so an additional attacker is sacrificed for more control. Statistically it is difficult to measure the worth of midfielders as clean sheets and goals are not the fairest measure of a working midfielder who wins the ball and distributes it to team mates.

The comparison below looks at Liverpool results with and without Sissoko, the number of goals scored and conceded with and without him plus his achilles heel of fouls in terms of yellow cards. Xabi Alonso has been included for comparison.

Liverpool win more games with Sissoko than without.

Liverpool win more with Sissoko in the side compared to when Alonso plays, however Liverpool win less games without Alonso than they do without Sissoko. And the record for Alonso covers three years, the first of which was not the best so Alonso is disadvantaged there.

But does Sissoko have an impact on the game in terms of goals, as a predominantly defensive player you would expect Liverpool to concede less with Sissoko in the team although, with a more defensive outlook, this can affect goals scored as well.

More goals per game scored with Xabi Alonso in the side and less goals per game without him in the side. Goalscoring has been the weak link in Rafa's reign, supply and distribution is a key element in creating chances and few would prefer Sissoko to be making the passes instead of Alonso. Whether there is room for them both is another matter, obviously some of the games both will have played.

The team concedes less goals per game when Sissoko is not in the team, although this may be in part down to the quality of opposition and Liverpool fielding a more attacking line-up. Alonso's inclusion appears to have minimal effect on the defensive records.

Of course it isn't just average number of goals that matter, if a team can keep a clean sheet then a single goal will win the game and you're guaranteed at least a draw.

So without Sissoko Liverpool score more goals per game and concede less goals per game registering a considerably greater percentage of clean sheets. This will in part be down to the opposition played, especially if Rafael Benitez feels the extra midfielder in the holding role is not needed because Liverpool are at home and the opposition less attack minded or if the opponents are someone we would be looking to beat home or away. Rafa may bring in Sissoko to try and control midfield against tougher opponents, whether this actually works is debatable. In 28 matches against Man Utd, Chelsea and Arsenal under Rafa, Liverpool have failed to score on 13 occaisions (46.4% of the time) and only kept 8 clean sheets - 4 of those against Chelsea in the Champions League.

Passing and scoring are two of Sissoko's weaker suits, something he has to improve on or his time at Anfield may soon come to an end. Xabi Alonso has a much better range of passes, scores the odd goal and the clean sheet record with and without him suggests Liverpool need him more than Sissoko.

Sissoko's disciplinary record has been highlighted throughtout his time at Liverpool. He can be rash in the tackle, but it was a little surprising to discover his record isn't as bad as you might fear.

Sissoko's only red card came in 2005/6 against Sunderland, this is surprising considering he is booked more than every fourth game and can be frighteningly reckless with his challenges. Xabi Alonso has picked up 25 yellow cards and one red card in his 130 appearances for Liverpool - that's less than a yellow card for every 5 appearances (19.2% of games). It is a shame Xabi Alonso has scored only 11 goals for Liverpool although the goal against Milan was crucial. That was the only game Liverpool haven't won outright when he scores (W9 D1 L0 - includes two against Luton Town). But like Crouch he doesn't score as many as he should, when Crouch scores Liverpool's record reads W23 D1 L0, so he has scored in only 24 out of 94 appearances (25.53%).

Signs of improvement are needed in Sissoko's game, Liverpool need to score more goals to add to a superb defensive record and the statistics do not suggest Liverpool are a better side with him in it. Liverpool in the current season have the second best defensive record in the Premiership, but disappointingly only the fourth best scoring record - exactly the same as it finished last season. In eight of the previous fourteen Premiership seasons the Champions have been top scorers and only once were they not at least second top scorers (Arsenal 97/98). Liverpool have not scored many goals in the Premiership under Rafa, the best any Liverpool manager has finished a season with is 71 (00/01 under Houllier) and that includes 42 game seasons. Rafa's current best goals scored in a Premiership season is 57, although this season Liverpool have scored 54 with 3 games to go. Liverpool are on course to set their lowest goals conceded total in the Premiership, to win the Premiership we must improve on goalscoring.

Xabi Alonso can play a holding role and now Mascherano has arrived you wonder if there is a future for Momo Sissoko. It is clear goalscoring is as important if not more so than a strong defensive record.