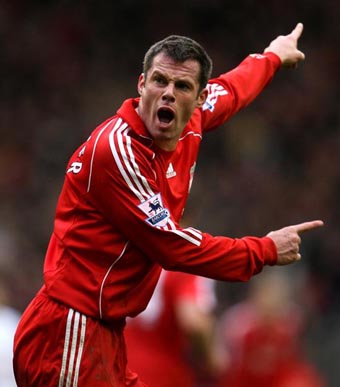 Jamie Carragher will equal Ian Callaghan's appearance record in European competition when he features vs. Chelsea at Stamford Bridge tomorrow night. Carragher made his European debut for Liverpool when he was in the starting line-up in the 2nd leg vs. Celtic in the 1st round of the UEFA Cup on 30th September 1997. 10 years later he will take his place along Ian Callaghan as the Liverpool player who have made more European appearances for Liverpool FC than any other in the history of the club! It won't be long until Ian Callaghan, who will certainly always be the player with the highest total of apperances for Liverpool, will have to take 2nd place to Carra when the second leg of the semi-final takes place.

When Carragher will play for Liverpool against Chelsea in the 1st leg of the semi-final he'll make his 89th appearance in European competition which equals Callaghan's total. Who's who of Liverpool's greatest players are left in his wake such as Tommy Smith (85), Ray Clemence (80), Emlyn Hughes (79) and even Phil Neal (74), who won four European Cups. Two current players are in the top ten list, Sami Hyypia (81) and Steven Gerrard (75). Here is a link to the European appearance list on our site.

Carra's total of 89 games is in following competitions: 59 appearances in the Champions League, 28 in the UEFA Cup and two in the European Super Cup.

As stated before Carra debuted in Europe vs. Celtic in 1997. That game proved to be his only European game in the 1997-98 season as he didn't feature in the next round when Liverpool got knocked out by French side Strasbourg.

Carra played in all of Liverpool's six UEFA cup matches in the following season. Liverpool sent Kosice from Slovakia on its way and did well to knock Valencia out on away goals after drawing 0-0 at Anfield, going through by drawing 2-2 at Mestalla. Liverpool messed up their progress by losing both legs against Celta Vigo in Spain.

There was no European football on offer in Houllier's first full season, but Carragher more than made up for it in the treble season with 12 games when Liverpool conquered the UEFA Cup. The Champions League group stages awaited as long as Liverpool would dispatch Finnish side Haka in a qualifier. Carra made his Champions League bow in the Olympia Stadion in Finland. Liverpool didn't have any trouble, beating the Finnish side 9-1 over two legs. Liverpool was drawn in a group with Boavista, Dynamo Kiev and Dortmund and grabbed top spot undefeated with three victories and three draws. The next group phase offrerd naturally stronger opposition like Barcelona, Roma and Galatasaray where Liverpool drew 4 out of 6 games and progressed in 2nd place due to a dramatic 2-0 win vs. Roma when Houllier made his long awaited comeback. Liverpool's run ended in dramatic circumstances at Bay Arena against Bayer Leverkusen in the quarter finals. A 1-0 lead from the 1st leg didn't survive a tense encounter where Liverpool lost to a Lucio goal in the 84th minute. Leverkusen eventually lost 2-1 to Real Madrid in the final.

The 2002-2003 season was a big anti-climax to the exploits from previous season and Liverpool disappointed in the Champions League just as well as in the Premier League. Rafael Benítez' Valencia topped the Reds' group and Basel progressed and relegation into the UEFA Cup stared Carra in the face. Vitesse Arnhem and Auxerre were dispatched of, but Celtic proved too big an obstacle and a highly anticipated return at Anfield after a 1-1 draw at Celtic Park ended in a bitterly disappointing 2-0 defeat at home.

Carragher missed most of the 2003-4 season due to injury and only featured in half of the UEFA Cup games, Liverpool being eliminated in the 4th round by Marseille. A dramatic season followed which captured the imagination of the whole world.

Liverpool qualified from the group stages including Deportivo La Coruna, Monaco and Olympiacos in the most dramatic fashion possible when Gerrard guaranteed a 3-1 win with an emphatic shot against the Greeks at Anfield. The Reds got into the final in the most difficult way possible beating Leverkusen, Juventus and Chelsea on the way. Carragher's heroics firmly established his reputation as one of the best defenders in Europe playing every single game of the Champions league winning campaign.

Liverpool did not qualify for the Champions League through league position, and had controversially to participate in three qualifying rounds on the strength of the European Cup win to reach the group phase. Carragher will no doubt forever remember the 2nd round vs FC Kaunas when he managed to score his first goal for the club in 6 and 1/2 years! Carragher played every game in the group phase where Liverpool topped the group including Chelsea, Real Betis and Anderlecht. Benfica was considered a relatively an easy draw (if there ever is one in the Champions League, but failed altogether against a well structured Benfica side under Ronald Koeman's guidance which had earlier knocked out Manchester United.

Liverpool was not altogether convincing against Maccabi Haifa in the qualifying round of the current season, but a 2-1 win at Anfield in the first leg proved the key. Again Liverpool won its group with PSV Eindhoven going through as well. The European champions of 2005 and 2006 were drawn against each other. Liverpool celebrated a surprising 2-1 win at Nou Camp with golfing partners Bellamy and Riise scoring the goals. Barca should have been well beaten at Anfield, but Liverpool hitting the crossbar twice somehow avoided to score, Gudjohnsen's goal setting up an exciting finale to the match. Liverpool met their opponents from the group phase in the quarter-finals the Reds securing progress to the semi-finals with a 3-0 victory in Holland.