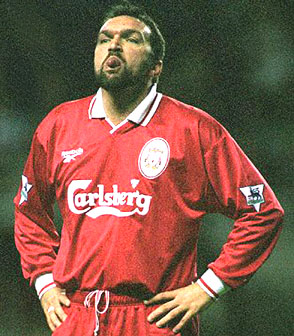 Ruddock breaks Andy Cole's legs back in 1996: "I can only assume it was the way he fell."

Andy Cole has slammed Liverpool's Neil Ruddock for the tackle that cracked both his legs and put him out of football for at least three months. Manchester United's £7 million striker does not accept Ruddock's view that no one can be blamed for the incident in Saturday's reserve game at Anfield.

Cole stormed: "He says he played the ball but if I am in front of him by two or three yards, then how could he have played the ball? I was chasing after a good ball from Paul Scholes when suddenly I was sent flying into the air. If challenges like this occur in every game then people are going to get seriously hurt. I'm shattered by the injuries and disappointed with what Neil Ruddock has said."

Ruddock was booked for the tackle but insists: "My conscience is clear. I thought I had a chance of getting the ball so I slid in. I went over to ask Andy if he was all right and he told me his leg was hurting. When I saw him walk off the field I thought he was OK. I only found out after the weekend that he was badly injured and I was shocked. I can only assume it was the way he fell."

An X-ray on Cole revealed that the cracked bone in one leg may have been an old injury although his ankle in the other is broken in two places.