Only One Steven Gerrard

There has been much talk of Liverpool being a ‘one man team’ and depending entirely on Steven Gerrard. Well, this is debatable. Gerrard is unquestionably a key player for Liverpool, all teams have key players, whether Liverpool depend too much on Gerrard is another matter. Liverpool do have other key players who make the team work, Carragher is a rock in defence with Agger in front of Reina - it certainly wasn’t down to Gerrard that Liverpool kept 11 consecutive clean sheets. Finnan and Riise work hard down the flanks, Finnan showing his worth by setting up two goals in the win over PSV. Xabi Alonso, Javier Mascherano and Momo Sissoko work hard in the middle winning the ball and spraying passes around and Jermaine Pennant creates goals with his running and passing. The strikers may not score enough goals, but their contribution cannot go unmentioned. How many games would Liverpool win on Gerrard’s goals alone? Liverpool have scored 271 goals under Rafael Benítez, Gerrard has scored 47 of those (17.34%)

So how do Liverpool fare with and without Gerrard? It is true to say he is rested for certain games so this is hard to measure. Gerrard has played a lot of games under Rafael Benítez and of course for England in the past three seasons and that shows from time to time. Of the 174 matches Liverpool have played under Rafa, Gerrard has played a staggering 143 (82.2%) scoring 47 goals. He has also managed to curb his reckless challenges with just 10 yellow cards and a single red card in those 142 appearances.

Gerrard doesn’t miss enough matches for it to be a significant and meaningful comparison, especially as he tends to play the important matches when available and is rested for the games Liverpool think they can win without him. To miss just 10 games a season for the past season is phenomenal for a player of Gerrard’s type.

It is interesting to look at his personal stats in the past three seasons when he has consistently hit double figures and scores on average one goal in every third game. Gerrard's form was inspired by the Reds' glorious Champions League win in 2004/5 and he had such a great scoring season in 2005/6. His magnificent double strike in the FA Cup final helped secure another trophy and boost his Superman reputation. His scoring record was nearly that of a striker – 23 goals in 53 appearances – although it was boosted by a lot of early season qualifiers in the Champions League which saw him score 7 goals in 4 games against TNS and FBK Kaunas. Even so, 16 goals in the other 49 games is impressive (0.327 goals/app). 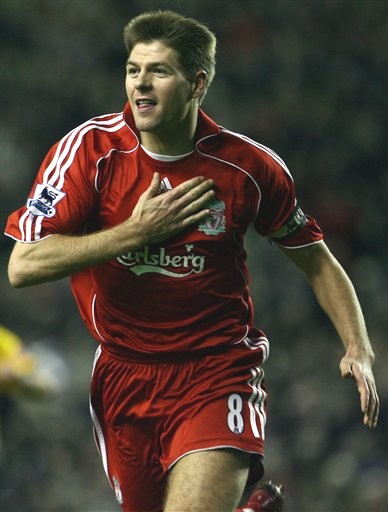 W-D-L columns reflects Liverpool's record in the games when Gerrard scores. (*The Milan and West Ham finals are counted as draws.)

Let's compare Gerrard’s scoring rate in the past two seasons with that of Liverpool's current top goalscorer, Peter Crouch.

Judging by this they are basically on par. Not bad for a player asked to play in the middle, on the right and as a second striker.

If we compare Gerrard's goalscoring to Crouch not considering the first 18 games Crouch played without scoring and only count from his debut goal on 3rd December 2005, the figures are a bit more favourable for Crouchinho - 31 goals in 76 appearances (0.408 goals/app).

Gerrard scored recently a brace against Middlesboro and is known to score important goals in top games, two vital ones against Chelsea coming up, and if he can keep up the level of the past three seasons then more trophies must follow.