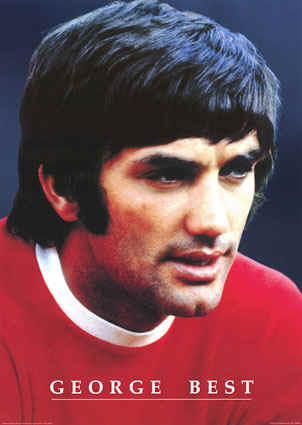 It is interesting to read the great Bestie's thoughts on Shanks and also reveals Shanks' mind games that he was such an expert of, forcing the opposition to submission....

Apart from the derby matches against Manchester City the really important game of the season for me was against Liverpool. I was always one for the big occasion and they didn't come much bigger in the domestic football calendar than United against Liverpool.

For a start, you had two of the greatest post-war managers of British football pitting their wits against each other. Matt Busby and Bill Shankly both achieved a rare status reserved for the truly great by becoming legends in their own time. They were both great motivators and had that rarest of ability to spot talent. It was Shankly who spotted the potential of Ray Clemence and Kevin Keegan when they were playing Fourth Division football with Scunthorpe United. It was Matt Busby who thrust me into the United first team just after my seventeenth birthday and who signed a scrawny kid with terrible eyesight called Norbert Stiles.

It was a clash of the Titans every time the two clubs met. At United we could boast a team bristling with internationals. In the mid-sixties their players were household names: Ian St John, Chris Lawler, Ron Yeats, Ian Callaghan, Peter Thompson, Tony Hateley and Roger Hunt, who was a member of England's World Cup-winning team of 1966.

The atmosphere when the teams met was electric. When the Liverpool Kop sang 'You'll Never Walk Alone', I'd look up from the pitch and see them swaying in time to their singing, which had the force and emotion of a massed cathedral choir.

Bill Shankly, like Matt Busby, was a canny Scot who was never lost for words. I liked him a great deal and I know he liked me. I respected his knowledge of the game and loved his keen wit, which was as sharp as legend has it.

After a game against Liverpool at Old Trafford in 1965, Shanks asked how I was coping with life. I was only nineteen at the time. 'Fame, son,' Shanks told me, 'is the price you pay for doing your job well.'

A few years later I was to understand the full implications of his words. It seemed every time I met Shanks he would come out with at least one piece of worldly wisdom or humour. When I was about to renegotiate a contract at Old Trafford and intimated that I would be looking for a considerable rise in basic pay, Shanks gave me a long hard look. 'George, son, some advice,' he said. 'Don't be too demanding, because it's a sad fact of life that genius is born and not paid.'

He went on to tell me the story of the Liverpool full back Gerry Byrne, who, having won a place in the England team, felt he was worth considerably more than his new contract was offering. However, the way Shanks saw it, Gerry was paid for what he did for Liverpool. The fact that he had made the England team had nothing to do with what he was paid at Anfield and therefore it did not merit a rise in his wages. Gerry argued that international status was proof he had become a better player with his club.

'I may be wrong on other points, boss,' Gerry said, pressing his point. 'But I am right on this one, aren't I?'

'So what if you are?' Shanks told him. 'Even a broken clock is right twice in a day.'

Following a game against Southampton at Anfield, a young reporter from the Southern Evening Echo collared Shanks to ask him what he thought about a young Southampton winger called Mick Channon. Shanks was polite and told the reporter he thought the young Channon was a very good winger indeed.

'Would you say he's as good a player as Stan Matthews?' the reporter asked.

The reporter thanked Shanks for his time and turned away, scribbling the quote into his notebook. Suddenly, Shanks reached out and caught the young man by the arm. 'This Channon is as good a player as Stan Matthews,' he said, 'but what you have to remember is that Stan is sixty-five now.' In 1967, we arrived at Anfield to play Liverpool and as I glanced out of the window of the coach I saw Bill Shankly standing at the main entrance. I was the first player to alight from the coach and when I reached the entrance Bill shook my hand warmly. 'Good to see you again, George,' he said. 'You're looking well, son.'

This was unusual for him, and knowing Shanks to be a wily old fox, I decided to hang around to try to find out what he was up to. As each of the United players entered Anfield, Shanks shook his hand, welcomed him and told him how good he looked. Eventually, Bobby Charlton, a born worrier, came up to Shanks.

'Bobby, son. Good to see you,' Shanks said, shaking his hand. 'But by God, if ever there was a man who looked ill, it's you, Bobby!'

Bobby's face went as colourless as an icicle. 'Ill? I look ill?' he repeated, running the fingers of his right hand over his forehead and down his right cheek. He was visibly shaken,

'Aye, Bobby, son. You look like you're sickening for something. If I were you I'd see a doctor as soon as you set foot back in Manchester.' Shanks patted Bobby on the back and took off down the corridor, leaving him trembling in the foyer.

In the dressing room, Bobby was conspicious by his absence and, ominously, there was a delay in announcing the team. We sat around kicking our heels, no one daring to get changed in case Matt Busby had a tactical plan which meant leaving one of us out. The thought of getting changed only to be told to put your clothes back on because you're not in the team is a player's nightmare.

Eventually Matt Busby entered the dressing room with Jimmy Murphy and told us they had reshuffled the team which had beaten West Ham the previous week. Bobby Charlton was unavailable. He'd suddenly been taken ill.

The following season we were back at Anfield and Shanks was up to his old tricks. As the United party made their way down the corridor to the away changing room, he appeared from his office. 'Guess what, boys?' he said, brandishing a little orange ticket. 'I've had a go on the tickets that give the time when the away team will score. And it says here, in a fortnight!' With that, he disappeared back into his office.

We lost that encounter 2-0 and after the game I was chatting to Liverpool's Ray Clemence, who revealed to me another piece of Shankly kidology.

Prior to the game, Shankly had received the United team sheet and he incorporated it into his team talk. His intention was to run us down and, in so doing, boost the confidence of his own players. 'Alex Stepney,' Shanks began. 'A flapper of a goalkeeper. Hands like a Teflon frying pan - non-stick. Right back, Shay Brennan. Slow on the turn, give him a roasting. Left back is Tony Dunne. Even slower than Brennan. He goes on an overlap at twenty past three and doesn't come back until a quarter to four. Right half, Nobby Stiles. A dirty little -beep-. Kick him twice as hard as he kicks you and you'll have no trouble with him.'

'Bill Foulkes, a big, cumbersome centre half who can't direct his headers. He had a head like a sheriff's badge, so play on him. Paddy Crerand. Slower than steam rising off a dog turd. You'll bypass him easily.'

The Liverpool players felt as if they were growing in stature with his every word. 'David Sadler,' Shanks continued. 'Wouldn't get a place in our reserves. And finally, John Aston. A chicken, hit him once and you'll never hear from him again. As the manager finished his demolition job on United, Emlyn Hughes raised his hand. 'That's all very well, boss,' he said, 'but you haven't mentioned George Best, Denis Law or Bobby Charlton.' Shanks turned on him. 'You mean to tell me we can't beat a team that has only three players in it?' he said, glowering.

Thanks to Chun Lian for typing this article.