This is the Kop 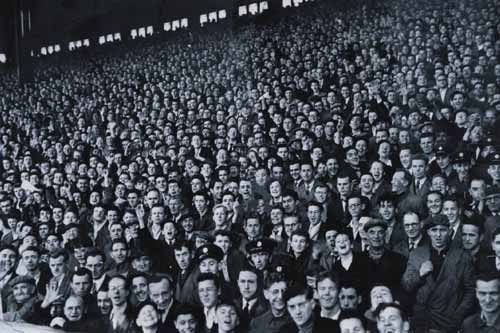 This is the Kop - the happy band of individuals which, collectively, makes up the greatest Soccer crowd known in British football. There's a kop at every ground; but when people talk about THE KOP, they mean Anfield... and the people who flock to support Liverpool behind the Kop goal, every home game.

The Kop has become an institution; a part of the Liverpool legend. It is a living, breathing entity which, spontaneously, can erupt into song, or chant a chorus which demonstrably spurs on the Reds... and is calculated to strike fear into the opposition.

The Kop... a collection of individuals devoted to their Liverpool team. Red and white favours and scarves are there in abundance. And the chanting, swaying mass becomes awe-inspiring and moving. For there is no malice; just devotion to a cause. We hate Nottingham Forest...BUT LIVERPOOL WE LOVE YOU!

The supporters make The Kop what it is and whatever form it has taken throughout the years. The building of the Kop structure itself started on the 22nd of June 1901 and it was officially opened at the start of the 1906/07 season. It was 100 concrete steps, measuring 394 feet long, 135 feet wide and standing 50 feet in height.

Ernest Edwards, the Sports editor of the Liverpool Post & Echo had named the new terrace, "The Spion Kop", as a tribute to the many local men who died in a Boer battle in South Africa on 24th of January 1900 to take a hill called "Spioenkop" that literally means "Spy hill". The town of Ladysmith, which was being held by the British, had been besieged by the Boers for a couple of months. The Spioenkop, which was occupied by the Boers, offered a view from the summit for hundreds of miles all around so the British considered important to attack it. The British prevailed in the end, but they had lost 340 soldiers before they ended the four months siege. 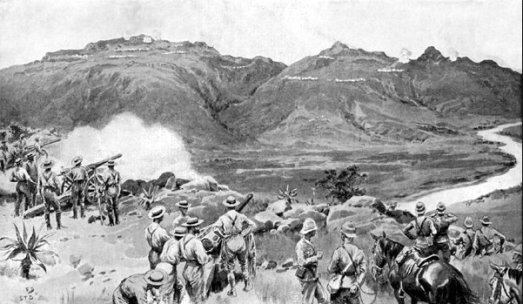 During the summer of 1928 The Kop was rebuilt and a massive roof was put up. The Hillsborough disaster brought on the Taylor report which forced changes to the famous terrace. Where the Kop had been was a building site in the summer of 1994, but at the start of the 1994-95 season a new cantilever stand had risen. Much has been written over the years about the decline of the Kop, especially since it was changed from a huge terrace to seating accomodations. The fact is that you don't have to go back many decades to remember the power of the Kop. Just rewind to 2005. The Kop played without a doubt a big part in Liverpool's 2005 European triumph, Liverpool prevailed against Olympiakos to an estatic Kop and Juventus were sent packing. The effect of the Kop was big on Juve's stars.

"I wasn't shocked at all by Liverpool's first leg performance a week ago because I knew how dangerous they always are at Anfield - which in my opinion is one of the most impressive grounds in the world for atmosphere. The Anfield crowd are amazing, as I had already been able to see for myself when I played there with Roma a few seasons ago."

Fabio Cannavaro, who scored Juventus' goal against Liverpool and who captained Italy to the 2006 World Cup triumph:

"The way Liverpool fans sing and support the team throughout the game is fantastic."

"The fantastic atmosphere at Anfield was like an electric shock for Liverpool's players, who started the match at an astonishing tempo. They seemed unstoppable. At Anfield, even experienced players can have a bad start because of the excitement of playing in such a stadium. We were constrained, almost in a daze at the start. Pushed by their fans, the Liverpool players were extremely motivated and aggressive. They didn't allow us to play in the first half-hour."

The Kop played an equally big part in the semi-final vs. Chelsea, which has been described as one of the best nights of the Kop. Jose Mourinho was disappointed, but he didn't fail to recognise the "persuasive" power of The Kop even though he was complaining as usual:

"I felt the power of Anfield, it was magnificent. I felt it didn't interfere with my players but maybe it interfered with other people and maybe it interfered with the result. You should ask the linesman why he gave a goal. Because, to give a goal, the ball must be 100 per cent in and he must be 100 per cent sure that the ball is in. My players say it was not a goal. I haven't seen it on television but other people say you can't say for certain it was a goal. Only one person decided the future of the teams and of players who have never played a Champions League final. So it's very strange. It was a goal from the moon or the Anfield Road stand, I don't know where. But I respect that, I make mistakes, players make mistakes and he made a mistake. That's life." The "travelling Kop" saw their heroes off to victory at the Ataturk Stadium in Istanbul. The fans didn't surrender at half-time when the odds were against Liverpool. They kept the Kop pledge, it may be an unofficial one, but perfectly describes the Kop:

Always support the team, no matter how bad they are playing.

If the team is doing badly, cheer even louder as they need your support more.

If a player is struggling, sing his name louder and more often as he needs it.

If the opposition are the better side and perform well, appreciate it and give them the credit they are due.