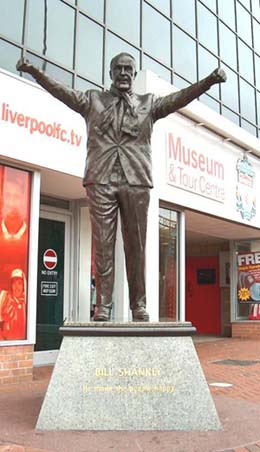 "Not so long ago, I found myself standing alone behind the Kop at Liverpool's football ground, staring intently at the bronze image of Bill Shankly. Bill Shankly, for me, will always be flesh and blood, human to a fault. Conflicting emotions rise to the surface when I think of him. I'm torn between love and hate, admiration and, sometimes, let me be honest, at least a little anger and disillusionment."

I never imagined the situation that unfolded in the pre-match lobby of Newcastle United in the autumn of 1969. Well, maybe that's not quite true. I always knew I had to play out the scene one day, because it is one no player can avoid forever, but I assumed the circumstances would be rather different. I didn't expect such a gut-wrenching surprise, an ambush that came without a hint of warning.

I had just performed one of the rituals of match day, as I had done countless times before. I had gone out front to pass on some tickets promised to friends, and exchanged a few pleasantries, all the time my mind ticking down to the forthcoming action. In the lobby, the great legend of the north east, Jackie Milburn, who had become a football writer, was handed copies of the teamsheet by a club official, and we amiably shared the latest gossip. As Milburn ran his eyes down the teams, I said I had to get back to the dressing room to change. Then he looked up sharply and said a few words that might have been, for the impact they had, imprinted on my brain with a branding iron - 'Bonnie lad, you're not playing.'

Bill Shankly had dropped me without saying a word, without even meeting my eyes. This was the day I stepped down from one of the certainties of life - the one that said I always made the team and the anguish of omission was somebody else's fate. Of course, like death and taxes, it was inevitable, but I thought it was reasonable to believe that the day would not come unannounced, like a thief in the night to rob me of a confident expectation that, suddenly, I realised how much I had always cherished.

"Somehow the blow might have been softened. I always thought I would have the chance to absorb the blow before I had to deal publicly with my new, diminished status. I didn't expect to get the words so suddenly, in a room full of strangers, and from a man who knew right down to his bones the implications of what he was telling me. He couldn't keep the shock off his face.

As I hurried down the corridors of St James's Park I thought of the great relationship I had had with Shankly, all the warmth and the intimacies, the endless laughter and the deep sense that beneath all the passing pressures of the game, and sometimes the terrible tension and the cruelties that from time to time it produced, we had a deep under-standing. If it wasn't father and son understanding, it was something very close indeed - or so I had thought.

To this day, I cannot shake the belief that, at the end, Shankly had let me down. I was terribly disappointed he didn't handle it better. He should have taken me to one side, even in the hotel in Newcastle on the eve of the match. He could have said any of a hundred things. Anything would have been better than the blow administered by Jackie Milburn.

Neither Shankly nor I could change the realities of football, or the ageing process, but he could have shown a little courtesy. He could have taken away some of the rawness of the pain."