While fashion and sport are familiar bedfellows at Royal Ascot, it is rare that football's end-of-season showpiece finds itself in the shadow of the clothes one team decided to wear on the day. But the 1996 FA Cup Final will always be remembered for the remarkable white suits worn by the Liverpool players.

Predictably being called the Spice Boys in line with the hysteria surrounding the future Mrs Beckham and company at the same time, they set out to impress off the field as well as on it.

But their efforts did not have the desired effect as Liverpool were unable to replicate their success four years earlier, falling 1-0 to an Eric Cantona after 85 minutes.

Here BBC Sport traces those who wore white on that day back in 1996 and those who lifted the trophy.

Manager - Sir Alex Ferguson Still at the helm after more than 19 years in charge, Ferguson is the longest-serving manager in the Premiership. The 1996 victory was the third time United won the FA Cup under Ferguson.

Peter Schmeichel Left Old Trafford for Sporting Lisbon after the Treble-winning season in 1999. Was brought back to English football by Aston Villa before, surprisingly, finishing his career at United's arch rivals, City. His son Kasper is now on the books at City.

Denis Irwin The steadiest of steady left-backs, Irwin, who started his career at Leeds before moving to Oldham, spent 12 seasons at Old Trafford before leaving for Wolves in 2002. Retired two years later and has gone into media work with both MUTV and RTE in Ireland.

Phil Neville Played in the same Lancashire Schools cricket team as Andrew Flintoff but was a club stalwart at the other Old Trafford before being sold to Everton in the summer.

David May After joining from Blackburn Rovers in 1994, he suffered the double disappointment of finding it hard to displace Steve Bruce and Gary Pallister in the centre of defence while his former team-mates at Ewood Park won the Premiership. May eventually left Old Trafford for Burnley in 2003 and ended up playing in the North West Counties League for Bacup Borough.

Gary Pallister A great bit of business by Sir Alex Ferguson, even if a few eyebrows were raised when he coughed up a British record £2.3m to sign Pallister from Middlesbrough in 1989. Ferguson got nine great years out of the central defender before selling him back to the Teesside club for a £200,000 profit. Now works as a BBC pundit.

Roy Keane One of the outstanding central midfielders of his generation. A dynamic captain at United for more than a decade before eventually leaving late last year to fulfil a childhood dream to play for Celtic.

Eric Cantona Still idolised at Old Trafford, Cantona joined United for £1.2m from Leeds in November 1992. The mercurial and controversial figure surprisingly retired a year after the final and has since been involved in beach football, a bit of acting and a voiceover for Asterix cartoons.

Nicky Butt Another product of the famous youth team of 1992 alongside the Neville brothers, Paul Scholes and David Beckham. Moved to Newcastle in July 2004 but found himself out of favour once Graeme Souness replaced Sir Bobby Robson and is currently on a season-long loan at Birmingham City.

Andy Cole Ferguson caused a sensation when he signed Cole from Newcastle in 1995. He went on to score 93 goals in 161 league starts for Man Utd before being sold to Blackburn for £8m in 2001. Is currently at Manchester City and has scored 10 goals so far this season.

David Beckham Few could have anticipated the effect the lad from Leytonstone would have had on British popular culture, let alone football. It all really took off for him when he scored from the half-way line at Wimbledon on the opening day of the 1996/97. The rest has been relayed in countless biographies on the England and Real Madrid star.

Ryan Giggs Has carved out a glorious Old Trafford career since being compared to George Best after making his debut as a 17-year-old. Has won numerous medals but his greatest night in the FA Cup came when he ran the length of the pitch to score the winner against Arsenal in the 1999 semi-final and then flashed his chest in celebration. 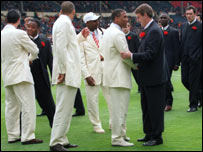 Manager - Roy Evans Evans was a member of the legendary Anfield boot room and took over as manager in January 1994 after the departure of Graeme Souness. Evans left in 1998, just a few months after Gerrard Houllier had been brought in as joint manager. Evans is currently involved with the Wales national team.

David James His idea for the white suits was as wise as his decision to come for the corner that led to Cantona's winner. James carved out a successful career despite being maligned for errors. Has lost his England place to Spurs' Paul Robinson despite some solid displays for Manchester City.

Jason McAteer Epitomised the Spice Boy image by doing a shampoo advert but was sold to Blackburn for £4m in 2001. Highlights of his career include scoring the goal that sent the Republic of Ireland to the 2002 World Cup. Now trying to help Tranmere Rovers out of League One.

Rob Jones A graduate of the Crewe production line, Jones had his career cut short by injury after once being a bright England prospect. Famed for making more than 200 appearances for Liverpool without scoring a goal, he retired at 27 because of a back injury but now runs coaching courses and a successful nursery business in Cheshire.
John Scales Left Anfield six months after the final but was unable to make much of an impression at Tottenham after his £2.6m move. Scales made three appearances for England and after retiring became player-manager of the national beach football team.

Phil Babb Captured from Coventry after a successful World Cup in 1994 with the Republic of Ireland but never really reached those heights in a red shirt. Eventually left for Sporting Lisbon, finished his career at Sunderland and then helped set up a golfing magazine with McAteer.

Mark Wright Retired in 1998 after being the captain that lifted the FA Cup for the Reds six years earlier. Moved into management and had spells as boss at Southport, Oxford and Chester and was sacked in January from League Two Peterborough.

Steve McManaman The boyhood Everton fan became a firm favourite at Anfield. Moved to Real Madrid in 1999 on a Bosman and won two European Cups and two Spanish league titles. Returned to England and signed for Kevin Keegan at Manchester City in 2003 but was released last summer. A media career beckons.

Stan Collymore A player who became as notorious for his off-the-field actions as the spectacular goals he netted on it. Played for a whole host of clubs, including Liverpool, Nottingham Forest and Aston Villa.

Robbie Fowler Came up through the ranks and scored 171 goals in 299 games for Liverpool before he was sold to Leeds for £11m in 2001. Eventually moved to Manchester City, teaming up with best mate McManaman, before making a surprise return to Anfield last month. Is Cup-tied after scoring a hat-trick for City in the third round against Scunthorpe.

Jamie Redknapp Suffered an injury-plagued career that limited his performances both at club and international level. Moved to Spurs on a free transfer in 2002 after 11 years at Anfield and finished up playing for his father Harry at Southampton. Having retired last summer, he is now an analyst for Sky Sports.

John Barnes "Digger" was made the highest-paid player in the country soon after joining the Reds in 1987, rumoured to be on £9,000 a week. Despite capturing winners medals in 1989 and 1992, perhaps his most memorable FA Cup achievement will be his starring role on the number three smash the Anfield Rap. Retired in 1999 and is now a presenter on Channel Five.