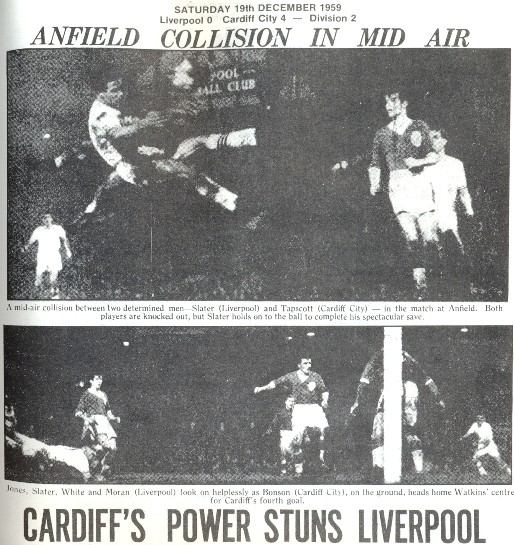 Bill Shankly, normally one of Soccer's most outspoken characters, was a very subdued man after sitting through his first match as Liverpool manager. Right from the start, Shankly was made to realise the tremendous task that lies ahead of him as this shabby Liverpool team was humbled by a Cardiff side wearing an unmistakable promotion look.

"Naturally I'm disappointed but it's just as well that I've seen the team give an off-form display in my first match. I've learned quite a few things this way," Shankly told me.

Whatever ideas Shankly has for Liverpool - and I expect drastic action when he takes over the team selection job - glaring weaknesses at wing-half and outside-right must have been apparent to all. Johnny Wheeler, Bobby Campbell, and right-winger Fred Morris will all want to erase this disastrous match from their memories very quickly. For a brief spell at the start of each half, Liverpool had a chance. But once Cardiff had settled to their polished game, there was nothing to stop them chalking up their fifth away victory this term. Even with Welsh international centre-forward Graham Moore limping badly from the 37th minute, City's football was a joy to watch.

Liverpool's lack of cohesion and urgency at half-back was naturally reflected in a poor service to the attack. Hard though Jimmy Melia worked, Dave Sullivan was always his master and with Dave Hickson effectively shackled by Danny Malloy, Graham Vearncombe's only anxious moments came from shots by Roger Hunt and Ronnie Moran.

However, Alan Jones, the 20-year-old Welshman making his League debut as Liverpool's right-back, can be satisfied with a reasonable first game. Trapcott's two headed goals came after Bert Slater had pushed Colin Baker shot on to the bar and from a perfectly-placed Brian Walsh corner. Joe Bonson and Walsh teamed up for Watkins to hit a glorious first-timer, and the winger later returned the compliment, Bonson completing the scoring with a diving header. Final blow for Bill Shankly was hearing the jeers hurled at the directors' box by the disappointed Anfield fans. Still, Shankly has never been afraid of hard work as a manager. I fear he's going to get plenty of it within the next few months. 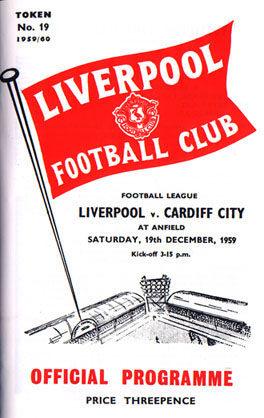