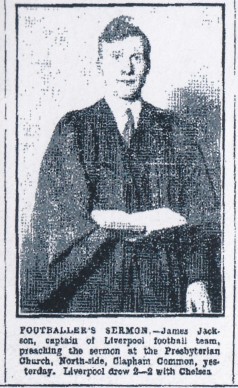 James Jackson, who was "all grit and determination," joined Aberdeen in June 1923 for a club record fee of £2,000 from Motherwell. After plying his trade in the homeland of his parents, the Newcastle-born right-back signed controversially for Liverpool in May 1925. Aberdeen's original asking price was £4,500 which Liverpool were not ready to pay. Jackson had been officially signed for Dons' next season, but requested to be sold to Liverpool, which Aberdeen finally agreed to for "only" £1,750. Jackson established himself at Liverpool towards the end of the decade and only missed four out of 126 first division games from August 1927 until May 1930 while captaining the side. He tore a knee ligament in the club's tour of Scotland at the end of 1929/30 and missed the last game of the season as well the first two months of the following campaign after ill-advisedly playing in the first game.

Parson's father, also James, was Arsenal's captain in the club's first division inaugural season so James jr. was always popular among the Gunners' fans and said to have received "the biggest ovation any visiting player ever gained at Highbury." Appropriately Jackson wore the captain's armband for Liverpool for the first time on 27 October 1928 at Arsenal. James Jr. started his divinity studies at Aberdeen University and finished them at Cambridge while still an active player for Liverpool so he missed almost three months during the 1932/33 season, for instance. One dumbfounded football writer asked after a game: 'Is Jackson really going to be a minister? If so, if he prays as hard as he plays he ought to be Archbishop of Canterbury in record time!' When Jackson left the club he was ordained as a minister in the Presbyterian Church and inducted into the charge of St. Andrew’s Church, Douglas, Isle of Man on 29 June 1933. In May 1946 he was appointed president of the Liverpool Free Church council.

Jackson's was not at all comfortable playing in front of Liverpool's Irish 'keeper, Elisha Scott, as Everton great, Dixie Dean, explained: "Elisha's language was unbelievable and the things he called me. Jimmy Jackson, who was called the Parson, was one of the Liverpool full-backs that day and he just couldn't stand Elisha's lingo and the words he came out with. Just after I had scored the third goal Jimmy turned to me and said, 'William, I shall never play in front of this man again.'" In November 1930 Jackson spoke in defence of football at the Great George’s Street Congregational Church, Liverpool. According to the scribe at the Nottingham Evening Post Jackson denied that swearing is ever learned at a football match, and declared that on an eight hours’ journey with the team he did not hear one offensive word (Elisha must then have been gagged and bound in the trunk!). Jackson also stated it was not football that caused men to gamble, but the fact that men and women to-day would gamble on anything. As for the charge of drinking laid against footballers the professional player realised he must keep fit, and must be a total abstainer. Jackson also defended his own status as football and preacher. “A man wrote to me to point out the unapostolic proceedings of being a professional footballer, and, at the same time, a professional preacher of the Gospel. There is still an idea abroad that sport, and football in particular, are wiles of the Devil, used to seduce young men from the straight and narrow path. I am convinced that my ability to play football is just as much a gift from God as any talent that man possesses.“ Jackson eventually settled in Poole, Dorset, where he died on 1st January 1977.

The Everton legend, Dixie Dean was Reds' chief tormentor in the 20's and 30's. Elisha Scott was Liverpool's custodian when Dixie was running amok and one of the greatest goalkeepers in Liverpool's history. 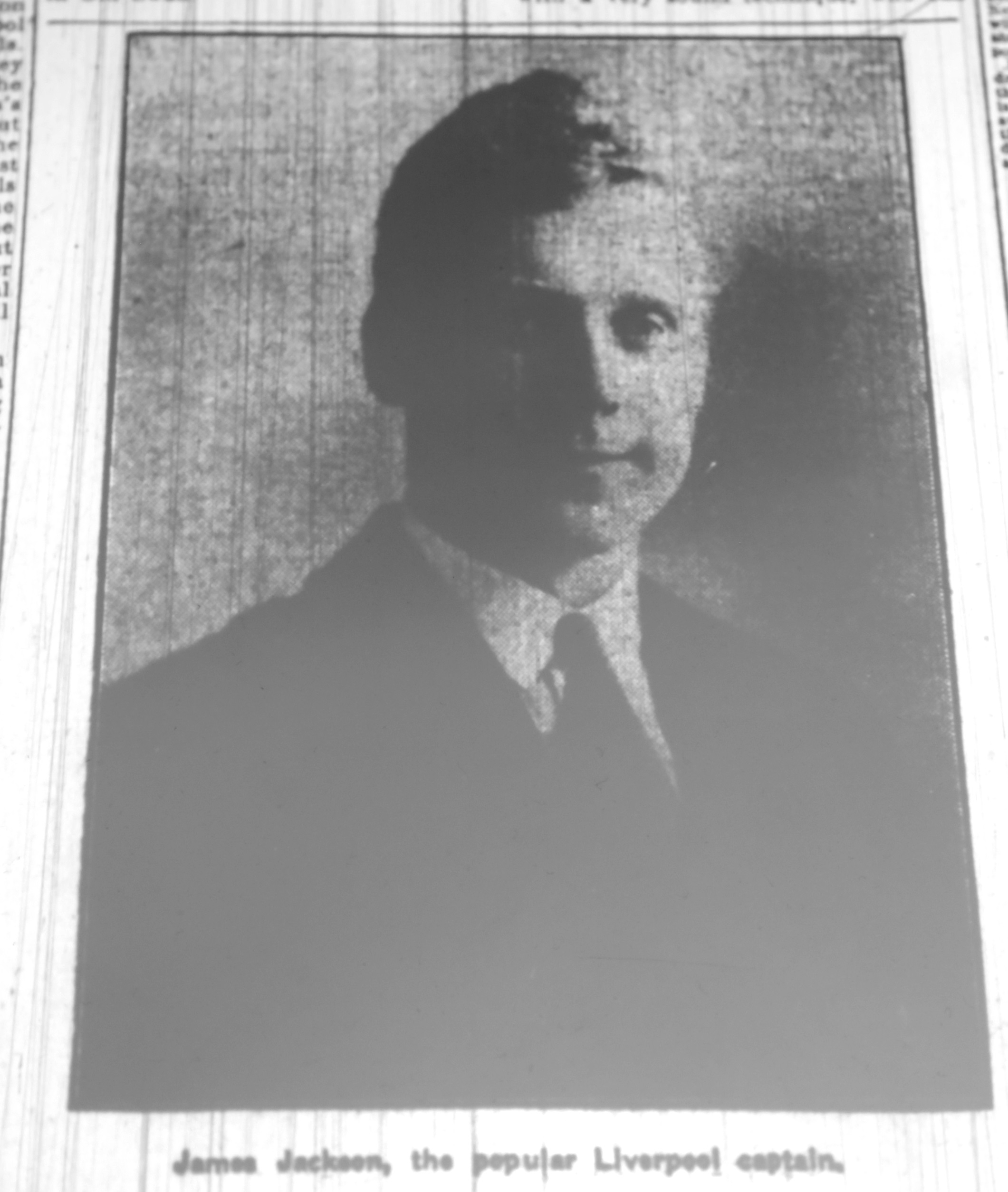 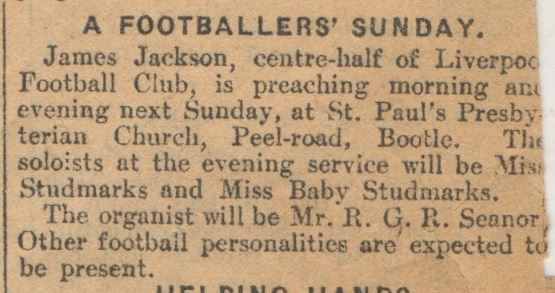 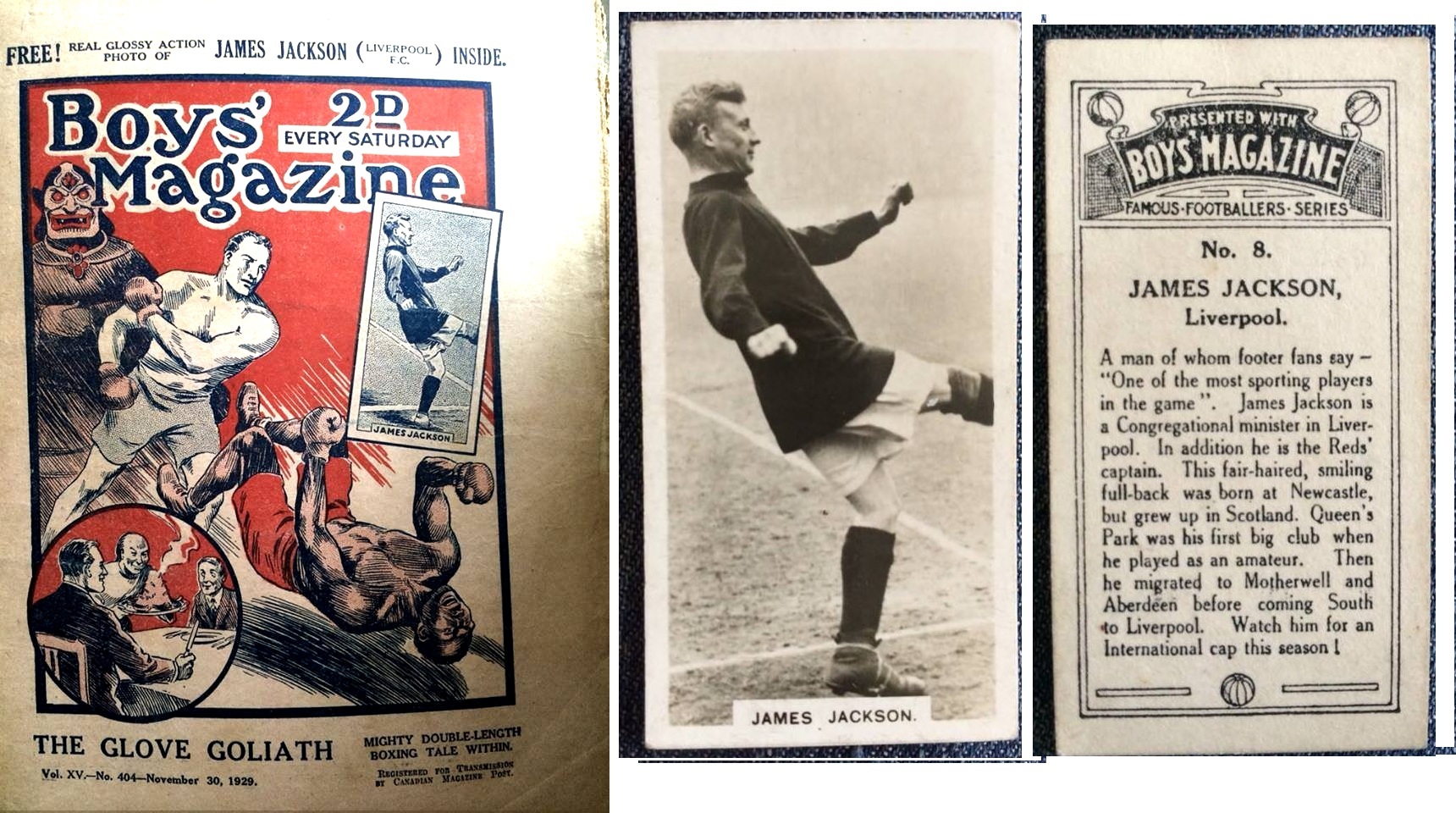 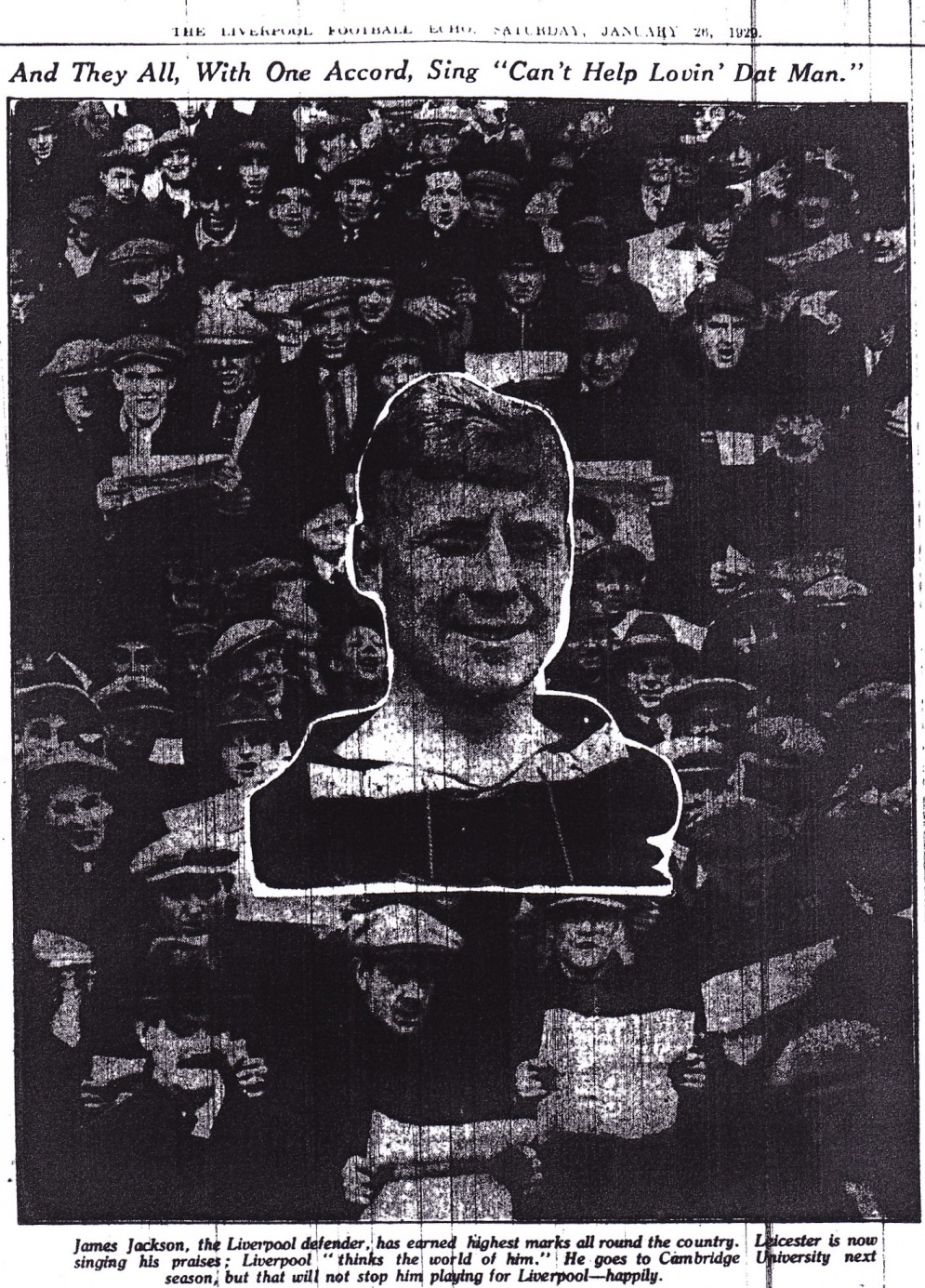 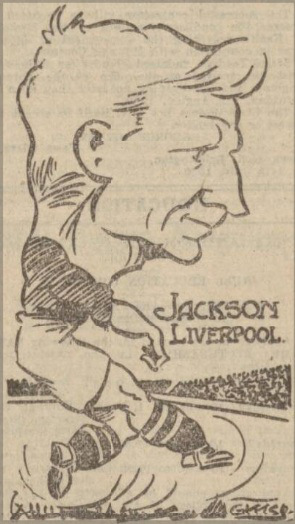 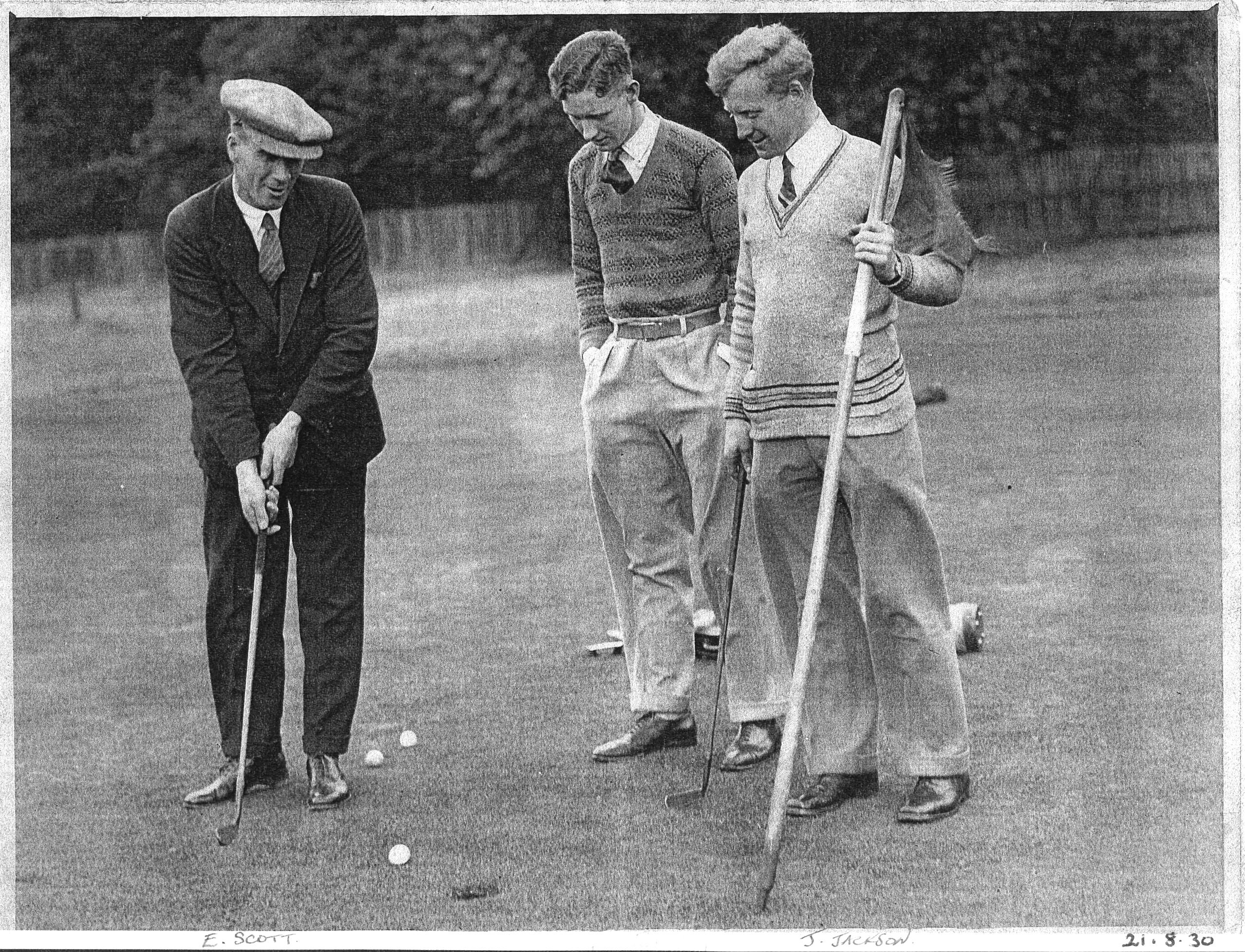 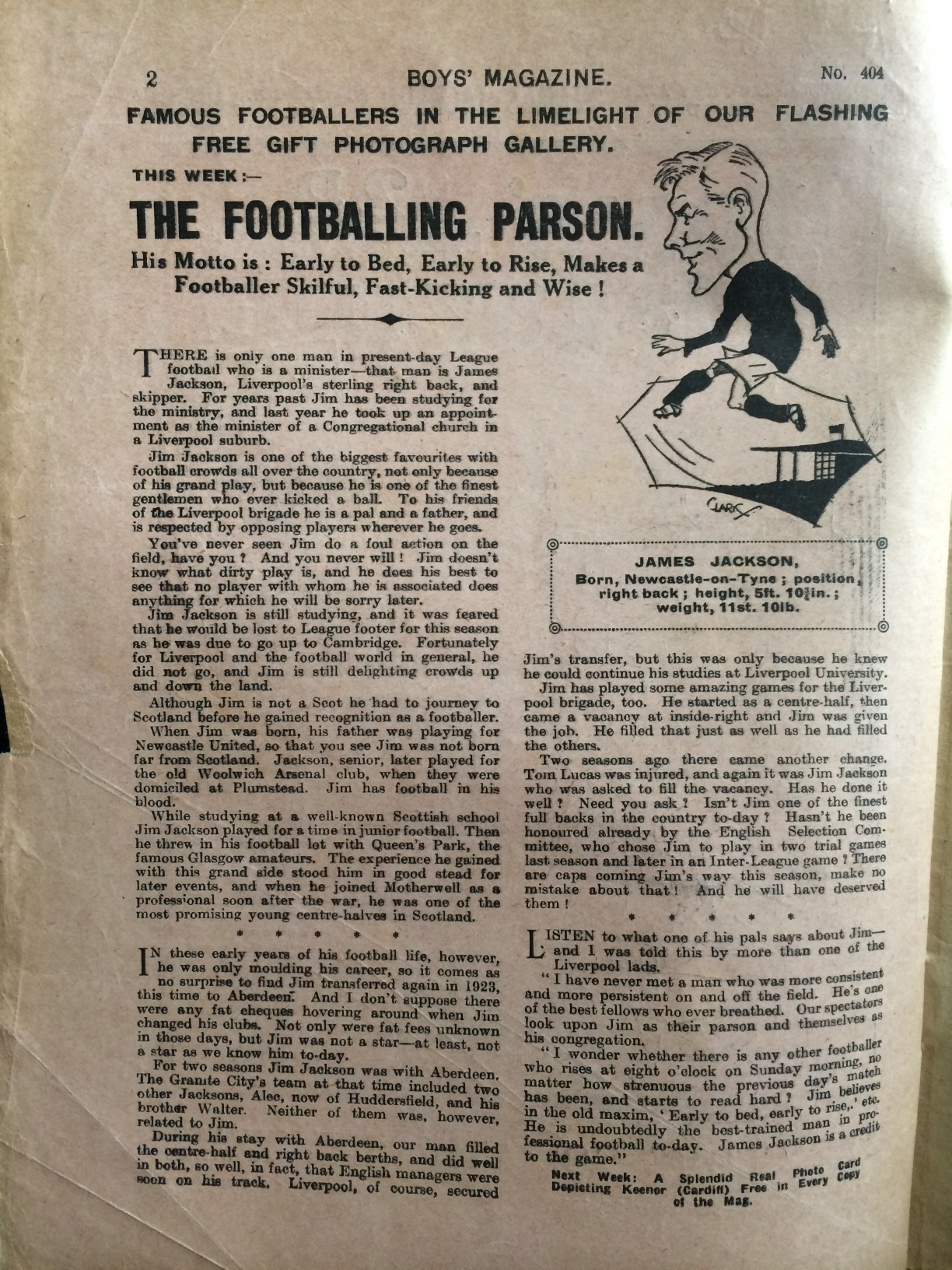