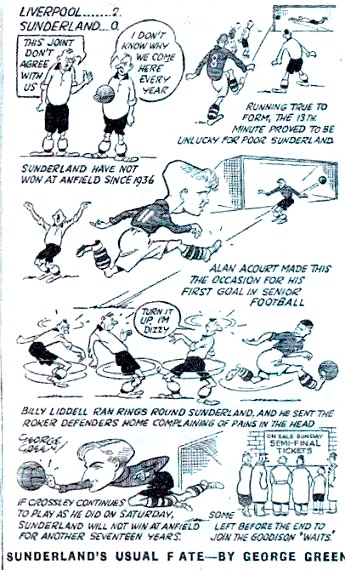 How much of a boost was the arrival of Shankly?

Shanks came in ‘59, They called him the suitcase manager you know, someone who moves around all the time. He was every enthusiastic and lived football, if you talked to him about any other sport, he’d get up and walk away. He spoke to a guy in America about Tom Finney, and the man didn’t know who Tom Finney was, Shanks just turned his back on him.

Did you get on well with him?

He wasn’t easy to talk to, Bob Paisley was very good for him in that respect. If you were injured, he wouldn’t even talk to you. I have to thank him as I was in the wax bath one day injured with a swollen ankle, and he came in (puts on Scottish accent) “your’e going to play today son” he said. So I strapped it up and played every game that season, the year we won promotion. If I missed a game and the team won, I wouldn’t get back in, he kept a winning side. In my last season, the year Liverpool won the championship, he only used 14 players.

Was there a feeling amongst players after Shankly arrived, that the club could be more successful?

Yeah, he introduced a lot of his own ideas for training, the sweatbox, Bob would have the stopwatch, and you would pass against the wall, control turn and do the same for every wall. If you missed the 4 ft board, another ball was thrown in, so you got no rest. He hired Reuben Bennett who could run players into the ground, so there was a lot of physical running.

What was it about Shankly that gave him the extra edge?

It just seemed to gel. I feel he never showed any signs of pressure. I don’t think you can show your players that you are stressed, and he didn’t show pressure in any form. He was always happy when people were around him.
He was fanatical about football. He didn’t like you playing golf and he didn’t like you going out. One year in a trip to Blackpool, we went to this nightclub run by former heavyweight boxer Jack London, Ian St John was the spokesman and said ‘We’re Liverpool Football Club’, and London replied “I don’t care if you are fucking Aston Villa, you’re not getting in here.” (Laughs) We thought, we’ll not argue with him. We got back to the hotel late and Bill and Bob were standing in the lobby with their slippers on. ‘I expected better of you Alan’, he said. And it was only a Sunday night!

The signing of Peter Thompson effectively ended your career at Anfield.

Yeah, he scored the winning goal against us in the FA Cup the year before. That was another disappointment - that I never got to a cup final. My book title could have been “Between Two Cup Finals”, because the year before I arrived and the year I left Liverpool went to the cup final. I did get a bit low when I got out of the team, after 10 years, and the team is winning and you are not playing, it was disappointing.

Did you feel that the loyalty you had shown had not been repaid?

That’s football. We used to say at Anfield, your only as good as your last pass. I had given 10 years good service, and what does disappoint me is that Tranmere had to pay £9,000 for me and I made nothing out of the deal. I wasn’t forced out, but I wanted to play. Look at Dudek today, he can’t even get on the bench. The difference is players are getting £35,000 a week nowadays for it, back then you didn’t get your bonuses and there was no substitutions, so you had no chance of playing.

Ferry across the Mersey…

Tranmere was obviously close to home, and we were pipped to promotion two years running. I might have been better going to the second division then dropping down the leagues rather than dropping straight from the first to the fourth division. Because where do you go then?

“Boys, I’ve just seen Bobby Moore, it looks like he’s been half awake all night. He’s got sleep in his eyes”. Alan recalls Shankly’s motivational techniques. It was like going in 1-0 up. But the proof of the pudding is in the eating, and if you are unbeaten at home all season, teams wouldn’t want to come to Anfield.

Was your last appearance at Anfield an emotional farewell?

Well I didn’t know it was my last game! (laughs) It was in the European Cup against Reykjavik. I hadn’t played the away leg, but played my first European game on my last appearance. Ironically my last league game for Tranmere, I scored a hat-trick. I’d never scored a hat-trick in my life! 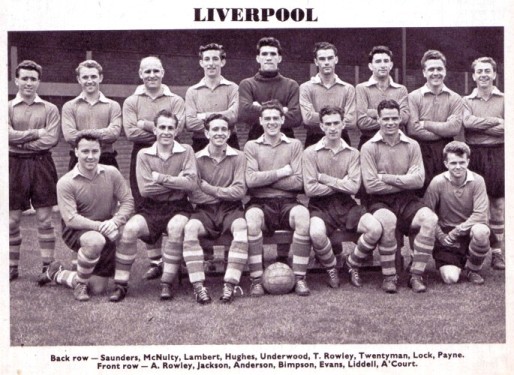 You played alongside Bob Paisley, how was he as a player?

Bob was very canny, as Phil Taylor the cultured defender was going forward, Bob in his soccer wisdom was covering. He did a job that rarely got praise in the media.

Could you tell he had the potential to be such a great manager?

No, not really when he finished playing, he was given the reserve job at Liverpool. I think he excelled himself to such a degree it surprised even Shanks in the early days.

You went to the World cup in 58 as a second division player, what an incredible feat?

I didn’t realise the significance of it then. I think there was a lot of other left halves, playing in the first division, but I was playing well for the under 23’s. We played Brazil, and couldn’t get the ball off them. They couldn’t score but they had great all round control, and their game hasn’t changed over the years.

Would you say that is the greatest achievement of your playing career?

No, my greatest achievement is gaining promotion. I helped send them down but also helped send them back up there. On an individual basis, playing for my country was great, and you can never take that away from me.

Quote from Ian Callaghan: "Everton were the glamour club back then, they had a much better stadium and I had a chance to go to them, but I was a Liverpool supporter and signing for them appealed to me more. The fact that two of my heroes, Alan A'Court and the great Billy Liddell were here made it easy for me to sign."

Ian Callaghan speaks quite highly of you..

He’s a lovely lad Cally, I said to him in the early days, if you get £20 a week put £5 of it away, and he did that throughout his career, and at one stage when he finished playing he was lending people money.

You say you never get asked about the 45 yard strike against Derby, only the 9-1 defeat, so here’s your chance- tell us about that goal Alan.

(Laughs) Well it was at the Baseball Ground, I picked the ball up inside my own half, left wing, dribbled just beyond the centre circle and whacked it into the top corner of the net. I couldn’t believe it. The trainer nearly fell off his chair and reminded me "you're only meant to stand on your right foot Alan."