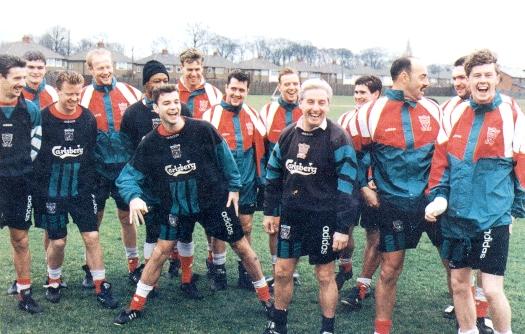 Rumours of a lack of discipline at the club were also rife. Liverpool's glamorous young stars were perceived as being more interested in the cat walk and the nightclubs than they were in football. The 1996 F.A. Cup final, and the notorious cream suits the players wore before the game, were symptomatic of what had gone wrong at the club. Evans though remains adamant that any suggestions that style was king over substance are wide of the mark.

"I don't know who's idea the white suits was, but to be honest if we'd won the game no one would have been bothered. (Ronnie and I decided to get ourselves measured up for navy blue ones though. Let's face it, if you're five foot seven you can't get away with wearing a white suit!). The game itself was a poor one but, if anything, we probably shaded it." 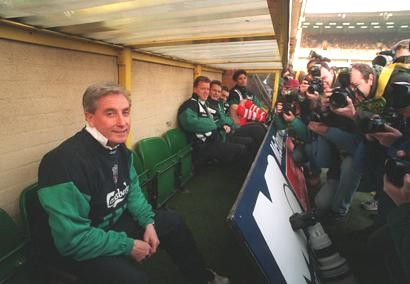 "Liverpool had never been a club that made the wrong headlines but around the time Graeme became manager the press saw the first cracks in the door and started to dig around behind the scenes finding out what players did in their private lives and so on. That's the way it's gone nowadays and it's happened everywhere."

The team may have lacked consistency but the players were as stylish on the pitch as they were off it. Steve McManaman, Robbie Fowler, Jamie Redknapp and the ageing John Barnes and Ian Rush were easy on the eye. The signing of maverick character Stan Collymore from Nottingham Forest in the summer of 1995 reinforced the positive attacking approach that Evans' Liverpool had adopted. Collymore's addition to the squad brought a frisson of excitement to the Kop.

"Stan's name always comes up in these conversations and I've nothing but praise for him. He was a great lad, still is a great lad and I've always said that in his time at Liverpool, particularly the first season, he and Robbie were brilliant together. Even now if you look through Robbie's career, the best partner he's ever had was Stan."

"Stan did a lot of things we didn't want him to do but he had the ability to do a lot of things no one else could. But we started getting problems with him in his second year when sometimes he didn't turn up for training. You could see the other players wondering what was going on."

Ultimately, talented as Collymore was, it's hard not to look back at his two years at Anfield and lament the fact that his signing was always doomed to fail. His increasingly bizarre behaviour at Aston Villa, Leicester and Bradford City was sad to see and indicated a personality that had an inbuilt self-destruct mechanism wired within it's psyche. 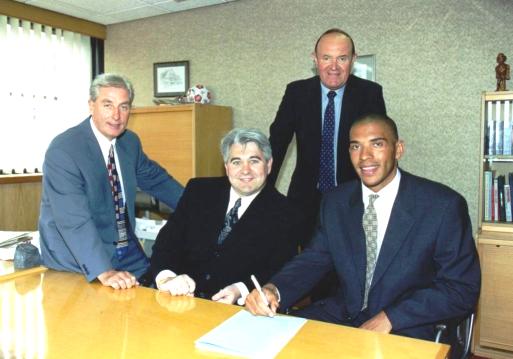 Stan the Man puts pen to paper at Liverpool

Paul Ince was another player who failed to impress the majority of the fans at Anfield. His signing from Inter Milan in 1997 was aimed at providing much needed steel to the midfield, but his performances for Liverpool were buried beneath a carpet of yellow cards and suspensions. Again Evans is quick to defend his player.

"People always see things differently. Incey was a winner. When he crossed the white line he just wanted to win and to be fair I think he did a great job for us. You have to remember he was well into his career when he joined us and he wasn't going to change his style or the way he played."

The startling emergence of Michael Owen in 1997 continued the seemingly endless production line of attacking flair the club has produced over recent years. He made his debut as a substitute for the soon to be departing Collymore against Wimbledon on May 7th. Barely a year later he would star for England in the World Cup finals in France.

"Steve Heighway brought Michael to our attention when he was about 15. You could see then he was going to be some player. It was very difficult to hold him back because he had such a mature attitude. Steve Heighway deserves a lot of credit for that as do Michael's family. In his 2nd game for us, against Sheffield Wednesday, he hit the post late on. It was the last game of the season and if it had gone in we would have finished 2nd and got a Champions League spot." 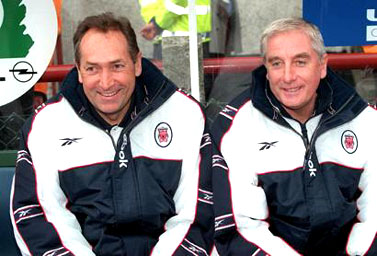 In the summer of 1998 the club paired Evans with the mastermind of French football's renaissance, Gerard Houllier, in an ill-fated managerial partnership. As Evans explains, it wasn't initially intended to work that way.

"We'd been looking for a new coach to help out because Ronnie was retiring and we'd spoken to Gerard about the possibility of coming over. At the last meeting someone asked what job titles we would all have and I thought maybe he was going to be given Director of Football or something like that, but the idea of joint managers was mooted. Maybe on another day I would have rejected that idea but we all agreed to give it a go."

Initially, the new partnership ran smoothly but once one or two poor results were posted it's limitations soon became apparent.

"There was a problem with the players not knowing who was supposed to be in control. I would be saying one thing and Gerard another and there was a bit of confusion around the place. Clearly it wasn't working. Somebody had to raise their hands and I guess I was the brave one who did. I knew the club weren't going to ask Gerard to step down."

Evans insists any rancour over the matter has long since disappeared. "There's always a certain amount of bitterness over these things and I remember feeling upset that the club was happy to carry on without me, but you can either stay bitter all your life or you can put it behind you and get on with things. There's no problem now. They did try to persuade me to join the board but that wasn't really for me."

"I get on fine with Gerard and I contacted him before all our recent cup finals to wish him all the best. I think I became something of a lucky talisman the year we won the treble !"

After a brief spell helping out Karl-Heinz Reidle at Fulham and a stint as Director of Football at Swindon Town, Evans remains out of the game he has loved since he was a boy. Does he think his days in the game are over then?

"You never say never in football but there's a perception about me that because I'm Liverpool through and through I couldn't work anywhere else. That's not true of course."

It does seem a waste that a man with Roy Evans' experience and knowledge of the game cannot be used at Anfield in some sort of coaching capacity. Thirty-four years must count for something but for now, Roy Evans' only input to the game comes courtesy of his regular punditry slots on Sky TV.

"The only regret I have is that we didn't win the title in 1996. I felt that side was good enough but in the end we just fell short."

It's a parting shot that resonates with me as I drive away from our meeting. The side was good enough but ... Something to do with bad timing I suspect.

Copyright - LFChistory.net - Interview from 2nd of May 2003