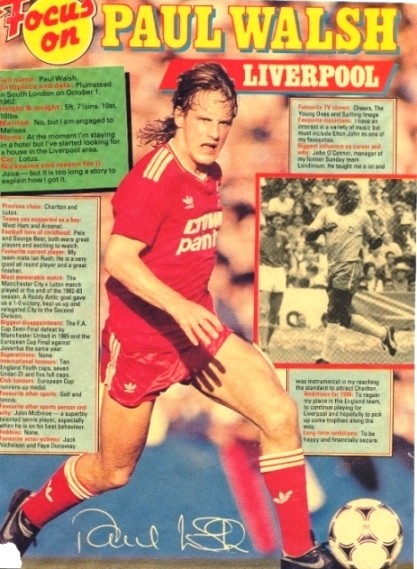 Full name: Paul Anthony Walsh
Birthplace and date: Plumstead in South London on October 1 1962
Height and weight: 5ft 7¾in. 10st 8lbs
Car: Ford Capri
Nickname: Juice. Apparently there is some word, which is unknown to me which sounds like Juice when I say it with my cockney accent
Team you supported as a boy: Arsenal and West Ham
Football hero of childhood: Pele and George Best, both were great players and exciting to watch
Favourite current player: My team-mate Ian Rush. He is a very good all-round player and a great finisher
Most memorable match: The Manchester City v Luton match played at the end of the 1982-83 season. A Raddy Antic goal gave us a 1-0 victory, kept us up and relegated City to the second division
Biggest disappointment: The FA semi-final defeat by Manchester United in 1985 and the European Cup final against Juventus the same year
Superstitions: None
International honours: Ten England youth caps, seven u-21 and five full caps
Club honours: European cup runners up medal
Favourite other sports: Golf and tennis
Favourite other sports person: John McEnroe, a superbly talented tennis player, especially when he is on his best behaviour
Hobbies: None
Favourite actor and actress: Jack Nicholson and Faye Dunaway
Favourite TV shows: Cheers, the Young Ones and Spitting Image
Favourite musicians: Elton John
Biggest influence on career: John O’ Connor, manager of my former Sunday team Londonium. He taught me a lot and was instrumental in my reaching the standard to attract Charlton
Ambitions for 1986: To regain my place in the England team, continue to play for Liverpool and hopefully to pick up some trophies along the way
Long-term ambition: To be happy and financially secure