Toshack and Keegan as Batman and Robin 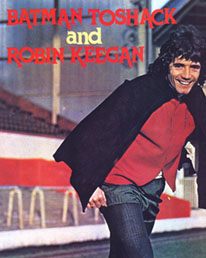 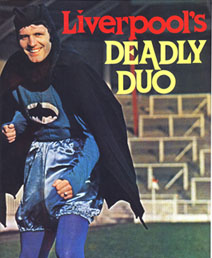 Batman and Robin they were called.

Kevin Keegan: "John Toshack and I weren't two of the most gifted players in the world but we combined to a good effect on the field."

John Toshack and Kevin Keegan were certainly a deadly partnership for Liverpool in the years between 1971-77. They were the quintessential big target man and the smaller forward playing off him.

John Toshack: "Myself and Kevin Keegan worked up a good understanding and as a partnership we flourished. We seemed to hit it off from almost day one and then got better and better as time went by."

Kevin Keegan: "Tosh was a wonderful player to play alongside. He aerial ability was fantastic and I always knew that he was going to win the high balls. From then on it was just a question of me reading which way the ball was going to go and from those situations we created many chances. I always admired Tosh's honesty as a player. He was a nice approachable lad and he did a really great job for the club during his time here."

Phil Thompson recounts their apparent telepathy: "Tosh and Kevin Keegan were now in overdrive. People had said they were telepathic and Granada TV chose to test it out. They sat facing each other in the TV studio, each holding a card up so the other could not see the symbol it carried. Everyone was completely astonished when they each guessed exactly right, calling out "square" or "triangle" or whatever it was. The truth was, they could see each other's cards in reflected glass, but it was a great laugh and enhanced their telepatic reputation."